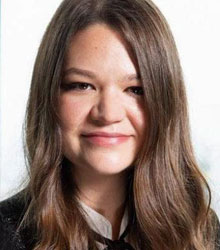 Brittany Kaiser is a data transparency advocate and the former business development director for Cambridge Analytica. The company collapsed after details of its misuse of Facebook data were revealed to have potentially impacted voting in the UK Brexit referendum and the 2016 US presidential election.

Kaiser is a whistleblower who testified about her involvement in the work of Cambridge Analytica before a UK Parliament select committee and the Mueller Investigation. Her experience at the company is shown in the Netflix original documentary, The Great Hack, which premiered at the 2019 Sundance Film Festival.

Prior to the exposè, in her role as the Director of Business Development Brittany was trained directly by Cambridge Analytica CEO Alexander Nix. While she was not privy to all the internal machinations of Cambridge Analytica’s activities as an employee of the company, she had access to many important and sensitive documents and communications, and was witness to a significant number of key meetings.

Brittany Kaiser decided to become a whistleblower for two reasons. Firstly, she wanted the truth about Cambridge Analytica and its activities to be exposed in the public domain. Secondly, she had come to the conclusion that the whole system of data brokerage was flawed and in contravention of fundamental human rights.

When controversy about the company’s practices broke in the news, Brittany agreed to a preliminary debriefing by The Guardian in March 2018 as part of the news organisation’s Cambridge Analytica Files investigation. She provided an initial selection of documents and information, which were the basis for a momentous story on Brexit, the Trump campaign, Facebook, and more.

Brittany’s experience with Cambridge Analytica has deepened her belief that people need and deserve greater rights over both the use and proceeds of their own data. She spends her time exploring ways to empower individuals to protect and take control of their digital rights, assets and identities for their own benefit.

While she was studying in Scotland, Kaiser took time off to work on Barack Obama's media team during his presidential campaign in 2007. She also worked for Amnesty International as a lobbyist appealing for an end to crimes against humanity.

After the fall of Gaddafi, Brittany helped establish a company to organise diplomatic conferences in Libya, on topics including trade and investment. Her primary motivation was to work on human rights issues in that country. In parallel, she started her PhD on preventive diplomacy, including studying the development of data-driven early warning systems to prevent possible acts of genocide. She also began consulting to human rights barristers and political campaigns internationally.

These activities, together with her background in the Democratic party, caught the attention of Cambridge Analytica CEO Alexander Nix. He offered Brittany a job at the SCL Group, the then-parent company of Cambridge Analytica, as a business-development consultant in late 2014. Brittany quickly excelled at the company and was promoted to Director of Program Development, and then Director of Business Development in 2015. She left the company in January 2018.

She is the founder of the #OwnYourData campaign and cofounder of the Digital Asset Trade Association (DATA), a non-profit lobbying firm advancing legislative and policy reform to protect the rights of individuals to control their own digital assets. She believes corporations such as Facebook must change their terms and conditions to provide transparency, opt-in and property/monetisation rights over the data produced on their platforms.

She has also recently joined the board of The Centre for Data Privacy, which won the first case against Equifax, to help individuals protect their legal rights over their personal data and file for compensation for data breaches.

Brittany Kaiser is also the author of”Targeted: The Cambridge Analytica Whistleblower’s Inside Story of How Big Data, Trump and Facebook Broke Democracy”, published in October 2019 by Harper Collins.

Brittany Kaiser is an expert in the use of data, digital asset legislation, and blockchain technology. She gives keynote speeches about these topics at public forums and conferences around the world to promote sustainable change and adoption of ethical principles for digital life.

Data has become the most valuable asset on planet earth and the amount of data currently in existence is staggering. Nate Silver, CEO of statistical analysis company FiveThirtyEight, estimates that “every day, three times per second, we produce the equivalent of the amount of data that the Library of Congress has in its entire print collection.”

With such vast amounts of personal data being generated – and with rising concerns around the privacy and protection of that data – oversight and individual rights are becoming increasingly important. As data complexity increases, so too does our need to provide greater capabilities and regulation around managing and maintaining that data.

Own Your Data: Reclaiming Your Digital Life
This keynote presentation is focused for individuals, students and public audiences on how to reform your daily habits and activities to protect yourself and your data, with exciting developments on the horizon to look out for and get involved with.

Own Your Data: Leading By Example
In this talk Brittany Kaiser focuses on how all companies and organisations can become more transparent and have a consensual and honest relationship with their customers, supporters and citizens.

Own Your Data: Changing Our Digital Future for Good
This talk is very future focused, discussing the flawed systems in our political and commercial spaces that allowed the big data disasters to take place, and how the world's best and brightest are working to reform these constructs to create a more transparent, ethical and balanced society.

Clients often ask about purchasing books for giveaways and delegate packs. Below you’ll find a selection of products by Brittany Kaiser. Click the images to view on Amazon's website. For bulk orders, please speak with your Booking Agent.

How to book Brittany Kaiser for your event