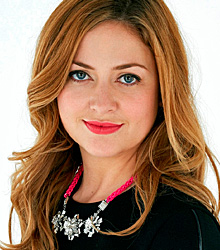 Kathryn Parsons graduated from Cambridge University with a degree in Classics and started her first business at 26 years old. She is the co-founder and CEO of digital education company Decoded.

Founded in East London in 2011 with a credit card, Kathryn was on a mission to spread digital enlightenment through an understanding of the world of code, data and the technologies behind the screen.

Today, their work decoding code, data, AI and cyber security has reached the boards and leadership teams of businesses worldwide.

Described by the Evening Standard as “a woman on a mission to teach us all to code”, Kathryn was part of the successful campaign to have code introduced as a mandatory subject to the UK National Curriculum in September 2014, for which she received an MBE in the Queen’s New Year’s Honours list.

Kathryn embraces creativity in all its forms, especially entrepreneurship and code. She loves taking an idea, making it real and seeing the positive impact it can have on people. By teaching people how to code, she is able to help empower people with knowledge and confidence.

The word revolutionary is tossed around relatively freely today, and applied to anything from new smartphones to the latest pro-biotic yoghurts. However Kathryn insists that one of the few truly revolutionary advances that society has made in the last few decades is the invention of the internet, and the World Wide Web that sits on top of it. Kathryn decided to find a way to make the internet clear and open to anyone who wanted to know more about it.

Decoded has since empowered and transformed thousands of individuals and businesses across the globe with its accelerated learning experiences teaching code in a day, data, future technologies and cyber security and has been at the forefront of driving the agenda for coding on the curriculum.

In 2016, Kathryn was appointed Chairwoman of the UK Government Institute of Coding.

In 2017, she joined the London Mayor’s Business Advisory Board, the UK Government Cyber Security Skills Advisory Board and the non-executive board of the Department of Business, Energy and Industrial Strategy.

Other accolades include being listed in the Sunday Times Britain's Top 30 Female Power List 2014 and Business Insider's “30 Most Important Women Under 30 In Tech”. Plus winning the Technology & Digital category of the 2013 Women of the Future Awards.

Their mission is to fill the growing data skills gap, ensure there is data literacy at leadership across business and government and realise the positive potential of emerging technologies such as AI within the economy.

Kathryn’s a self-confessed language lover, having studied Japanese and Mandarin in her spare time and Latin and Ancient Greek at Cambridge University. For her, code is just another language, only one that’s used by billions of people.

Kathryn Parsons is at the forefront of a gender revolution in the technology sector. She is perfectly placed to talk about women in business, entrepreneurship and the future of the digital economy - from data and innovation to AI and cyber security.

The Education Revolution
What’s happened to education in the past 100 years? Have we stopped learning? And has the time finally come for a radical rethink of what and how we are taught in our lifetimes?

In this keynote presentation, Kathryn Parsons’ shares her story of founding Decoded and how a mission to make technology jargon and fear-free resonated with a generation grappling with the impacts of technological change.

What are the skills of the future? What can be achieved when you put powerful new tools in people’s hands? And finally, what can government and business leaders do to be a part of The Education Revolution?

Kathryn’s other speech topics include:
The importance of digital literacy in business
Trends in the digital economy
Women in technology
Women in business
Creating a start-up culture in your business
Cyber security

Kathryn was a great start to DevDay and motivated the audience to approach the next two days of CordaCon with an open mind looking to learn about all our developments and that is the desired outcome we were looking for at the event.Her message about keeping an open mind to learning and development and to see challenges as an opportunity to learn and grow resonate with R3 and the core of what we do. She is an engaging speaker who delivers her message clearly and with humour and keeps the audience interested. A great start for us at CordaCon and please thank Kathryn very much.

How to book Kathryn Parsons MBE for your event