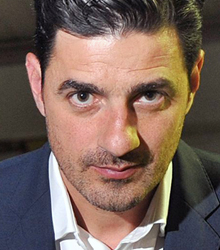 Alexis Conran, television and radio presenter, actor and magician is best known known as the man who identifies, uncovers and helps us to protect our businesses and ourselves, against scams and fraud.

As writer and presenter of The Radio Hustle on TalkRADIO and the highly acclaimed BBC TV show, The Real Hustle Alexis is in the rare position of being able to advise and educate, even the most foolhardy, on issues surrounding security and risk (in the real and virtual world), and identify the human behaviour, communication skills and confidence tricks that the world’s top scammers rely on to achieve their unscrupulous aims.

As the star of BBC3's hugely popular show The Real Hustle and other shows such as Hustling America (Channel 5) and The Mind Control Freaks (Discovery), Alexis has turned the world of scamming into an entertaining art form and is acknowledged both as a uniquely talented performer and someone with whom you do not want to be playing cards.

Born in Paris, but raised in Athens, Greece, at age 16 Alexis came to London to study acting. After graduating from LAMDA and pursuing a career in acting, Alexis followed a curious desire to study the art of magic. Within three years he was working as a professional magician specialising in card cheating. He started performing at exotic, celebrity-fuelled private parties around the world.

In 2003, he was part of a team asked to advise the writers and actors on the hit TV series Hustle for the BBC. His extensive knowledge of hustling, pickpockets and con artists gave the show an authenticity that didn't go unnoticed. Following this, Alexis was asked to star in a new TV show for the BBC, The Real Hustle which, since its debut in 2005 and demise in 2012 became one of BBC3's flagship series. Alexis is also the co-writer of the show.

In 2007 he was part of a magic special for BBC1 called Don’t Miss A Trick and in 2010 was extensively involved as a consultant producer from the very early stages on both series of The Magicians (BBC1), Derren Brown: The Great Art Robbery (Channel 4), Breaking Magic (Discovery) and Troy (Channel 4 / E4).

In 2012, The Real Hustle broadcast it's 11th series having completed more than 100 episodes and over 450 scams, making it one of the most successful series on the BBC. 2012 also saw Alexis' first solo project Gambling Addiction And Me – The Real Hustler, a documentary on gambling addiction.

In 2013, Alexis created his next TV format, Hustling America. The show saw him travel across America following in the footsteps of history's greatest hustlers to see if his skills in deception and magic will allow him to pull off the hardest cons of all time. Since the show's sale to the National Geographic Channel it has been broadcast around the world.

And proving that his talents stretch further than hustling, Alexis was crowned winner of Celebrity MasterChef 2016, drawing on his Greek heritage he brought traditional Grecian plates to the table, the success of this won him the crown.

2017 saw Alexis launch a new series for digital channel Dave, with best friend and comedian Marcus Brigstocke, called The Joy of Techs. He continues to regularly host The Radio Hustle for TalkRADIO every Saturday afternoon and present news segments in Shop Smart, Save Money for Channel 5.

Alexis Conran is a charismatic and experienced after dinner speaker and keynote speaker on security and risk. His after dinner speeches entertain and educate, as he uncovers ingenious scams, from the most elaborate to the deceptively simple. He also speaks candidly on the threats posed to businesses and the cleverest ways to protect ourselves against potential fraudsters, both in the real and the ‘virtual’ world.

Drawing on his personal experience, expertise in magic and mind reading to deliver speeches with a clear message about how to communicate and inspire confidence. Understanding and interpreting body language and non-verbal communications – abilities which are essential every day in working life – are two key messages that Alexis delivers in his keynote speeches.

Scamming, Card Cheating & Fraud Expert
Alexis Conran has turned the world of scamming into an entertaining art form and is acknowledged both as a uniquely talented performer and someone with whom you do not want to be playing cards.

Alexis has spoken at the RSA security conference both in Europe and the US, he has spoken at events for Experian, RBS, Halifax, Aviva, MIA the motorsport industry and has also worked as an advocate of the Scam Busters campaign for the Office of Fair Trading. He has also spoken for the Met Police and the DCPCU.

Magic Performance
Having contracted the “magic bug” quite early on in his life, Alexis has been performing his magic all over the world. He is available to perform at private and corporate events.

Alexis can adapt his style to suit all environments — from close-up magic to banquets and after dinner cabaret shows. He has performed all over the world and demonstrates an enticing and thrilling blend of entertainment and education for all who are fascinated by the world of hustlers and cardsharps.

Alexis both before, during and after his talk was easy to approach and great to talk to.Everybody was captivated by both his personality and stories and it was a perfect marriage really. We would definitely book him again!

Alexis Conran is a pleasure to work with. He is super smart and a master at his craft and there's a lot more to him than just being a magician / hustler. He really knows the psychology behind what makes people make the choices they do.

Excellent communicator and kept the audience engaged throughout his talk.

Very entertaining, Alexis Conran kept the audience engaged with interesting stories of “scams” that went right and wrong. A very entertaining speaker for any event.

Alexis did a great job – he was just the right balance and was well received by all present.

Professional and charismatic speaker; engaged well with the audience and kept their interest throughout the presentation. Could have listened to Alexis and his amazing stories all day, but we ran out of time….

How to book Alexis Conran for your event