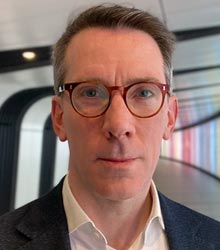 Geoff White is an investigative journalist who has covered technology for numerous broadcasters including the BBC and Channel 4. He was the co-creator of the Audible Original series The Dark Web, and for Channel 4 News he created the award-winning Data Baby Project.

His exclusives reveal tech’s impact on our lives: the controversial police use of facial recognition; the failure of artificial intelligence therapy apps; hi-tech call centre scams that have cost victims their lives’ savings; fraud in the internet dating industry.

Geoff has written and presented two major podcast series for Audible. Artificial Intelligence: Friend or Foe? reveals the origins of AI, and shows how the technology is seeping into everyday life.The Dark Web exposes the shadow internet created by the US military and now home to hackers, crooks and freedom fighters.

Geoff White’s own podcast series Cybercrime Investigations takes you inside the world of an investigative journalist, detailing the twists and turns as the story unfolds.

An experienced public speaker, he has given keynote talks at some of the UK’s largest tech events, in addition to hosting conferences and chairing panels at venues ranging from London’s Chatham House think-tank to the Latitude music festival.

Geoff is also the co-creator of The Secret Life of Your Mobile Phone, a live, interactive phone hacking stage performance which shows how the global technology industry is harvesting the data leaking from your handset.

For Channel 4 News he created the Data Baby project, a unique experiment which used a fictional online identity to expose how our personal data is being used – and abused – online.

An accomplished and sought-after public speaker, Geoff White has given keynote talks at some of the UK’s largest tech events, in addition to chairing conferences and appearing on panels at venues ranging from London’s Chatham House think-tank to the Latitude music festival.

Geoff offers a number of highly topical and relevant keynote business presentations. His most popular areas of speciality include:

Facial Recognition & AI
Geoff created a podcast series about AI for Audible and has completed two investigations for the BBC into facial recognition (which uses similar technology, but brings the ethical implications into very sharp focus). He keeps a close track of this emerging new technology and how it shapes the use of AI, especially around law enforcement and automated decision-making.

Privacy & Personal Data
For Channel 4 News, Geoff created the Data Baby strand, a unique project to track how our personal data is used – and abused – online. It took him into areas ranging from cookie legislation to internet dating fraud. In the years since that story the subject has exploded, taking in Cambridge Analytica, GDPR breaches and more.

Crime Dot Com
On 4 May 2000, an email that read 'kindly check the attached LOVELETTER' was sent from a computer in the Philippines. Attached was a virus, the Love Bug, and within days it had been circulated across the globe, paralysing banks, broadcasters and businesses in its wake, and extending as far as the UK Parliament and, reportedly, the Pentagon. The outbreak presaged a new era of online mayhem: the age of Crime Dot Com.

Geoff White charts the astonishing development of hacking, from its conception in the United States’ hippy tech community in the 1970s, through its childhood among the ruins of the Eastern Bloc, to its coming of age as one of the most dangerous and pervasive threats to our connected world.

He takes us inside the workings of real-life cybercrimes, drawing on interviews with those behind the most devastating hacks and revealing how the tactics employed by high-tech crooks to make millions are being harnessed by nation states to target voters, cripple power networks, and even prepare for cyber-war.

From Ashley Madison to the 2016 US Presidential Election, Crime Dot Com is a thrilling true story of hacking, past and present, and of what the future might hold.

The Secret Life of Your Mobile Phone
Geoff White presents a unique and fascinating journey into the private life of an indispensable gadget you thought was on your side. After watching this show, you’ll never look at your phone in the same way again!

The Secret Life of Your Mobile Phone is a one-hour live stage performance using cutting-edge interception technology to reveal the people, places and companies your phone is talking to behind your back – and what it’s telling them.

A sell-out hit at the Edinburgh Fringe Festival 2017, the show has been performed for a wide range of audiences, from the Latitude Music Festival and London’s Science Museum to the think-tank Chatham House and the Conservative Party Conference.

A highlight of our conference. Knowledgeable, likeable, entertaining and engaging speaker who tailored his speech to our industry.

Clients often ask about purchasing books for giveaways and delegate packs. Below you’ll find a selection of products by Geoff White. Click the images to view on Amazon's website. For bulk orders, please speak with your Booking Agent.

How to book Geoff White for your event