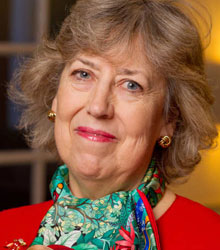 Eliza Manningham-Buller was Director General of Britain's Security Service (MI5) from 2002 to 2007, leading the organisation though substantial change in the wake of 9/11 and the growing threats from Al-Qaeda.

During her time at the helm, MI5 doubled in size, opened eight new offices and altered its approach to the professional development of staff with the establishment of a training academy. Earlier in her career, Eliza led the Service's investigation into the 1988 Lockerbie bombing of Pam Am flight 103.

Educated in Northampton and gaining an English degree at Oxford university, Eliza Manningham-Buller worked for three years as a teacher before joining the Security Service (MI5) in 1974. The main focus of her work was counter-terrorism, both international and domestic.

In the early 1980s, she was one of only five people who knew that Oleg Gordievsky, the deputy head of the KGB at the Soviet embassy in London, was actually a double agent.

She led the section responsible for international counter-terrorism at a time when its work was dominated by the Lockerbie investigation. She was later posted to Washington as a senior liaison officer to the US intelligence community. Her posting coincided with the first Gulf War.

On her return to the UK in 1992, Eliza led a newly created Irish counter-terrorist section against the Provisional IRA. This was formed in response to the Government's decision to make the Security Service in charge of intelligence work against Irish terrorism on the British mainland.

Eliza was promoted to the Management Board in 1993 and assumed lead responsibility for work on Irish terrorism, surveillance, technical collection, finance and IT before becoming Deputy Director General in 1997. In that role, she was in charge of the Services surveillance and technical operations, where she had day-to-day responsibility for oversight of the Service's operational work and its liaison with other law enforcement and intelligence agencies.

She was appointed Director General in 2002 — and the second female head of the Secret services after Dame Stella Rimington — a position she held until 2007, after 33 years in the intelligence and security service.

Eliza Manningham-Buller was appointed Dame Commander of the Order of the Bath (DCB) in HM The Queen's 2005 Birthday Honours and is now a cross-bench Peer.

HM The Queen appointed her a Lady of the Garter in 2014 and she became Chair of the Wellcome Trust in 2015, one of the world's largest non-governmental fund providers for scientific research. She leads a Board of Governors drawn from the worlds of science, business and public life.

In her keynote speeches, Eliza Manningham-Buller draws on her experience operating in the most demanding and extraordinarily high pressure environments, to advise on how leaders can be transparent and open to criticism while retaining a confident vision and strategy for the future.

Transparency & Authenticity
She stresses the need and importance for leaders in any walk of life to engage in frank dialogue and invite criticism. Do not try to be something you're not, take responsibility for your team and remember that praising people takes seconds and can make an enormous difference.

Intelligence
She discussed the profession of intelligence: the nature of intelligence, its value and limitations, and how it is practised. Explaining the role of intelligence officers, Manningham-Buller notes that they should be "comfortable with ambiguity" and drawn from "all sections of society" with diverse experiences and backgrounds.

Ethics
Ethical issues arise the whole time for intelligence officers, such as whether to talk to a terrorist or perhaps share information with a country that possesses a questionable record on human rights.

She speaks of the importance of legislation underpinning intelligence work, and describes intelligence as a shared endeavour between colleagues from different departments and countries.

We have never seen an audience so captivated. It was a joy to watch.

Clients often ask about purchasing books for giveaways and delegate packs. Below you’ll find a selection of products by Baroness Eliza Manningham-Buller DCB. Click the images to view on Amazon's website. For bulk orders, please speak with your Booking Agent.

How to book Baroness Eliza Manningham-Buller DCB for your event

To book Baroness Eliza Manningham-Buller DCB, please submit an online enquiry, email bookings@nmp.co.uk or speak with one of our booking agents on +44 (0)1372 361 004.