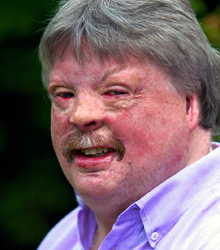 Only a handful of people would have recognised the Simon Weston who headed out for the Falklands Conflict as a Welsh Guardsman back in June 1982.

But the face of Simon Weston who returned from the bombing of the Sir Galahad in Bluff Cove is recognised the world over, not for his disfigurement from 46% burns, but for his determination that has inspired courage and the will to excel in countless others.

Following his injuries, Simon's road to physical, spiritual and mental recovery saw him active in a number of highly successful ventures including 'The Weston Spirit', a Liverpool-based young people's charity. His charitable work earned him an OBE in the 1992 Queen's Birthday Honours.

He was also awarded the Freedom of the City of Liverpool in 2002 in recognition of his bravery and his charity work in the region. He was honoured as one of the top 100 Welsh Heroes in 2004, and in 2014, in a survey conducted by Freud Communications, Simon was voted top of the UK`s Heroes Index, naming him the Nations Favorite Hero.

In November 2015 Variety Children's charity awarded Simon a Legend Award for his services to Motivational speaking and in December he was awarded the Freedom of the City of London. Then in the 2016 New Year`s Honours, Simon was awarded the CBE for his charitable work.

For two years Simon was the President for Wales Scouting, and is currently the Patron of the Falkland Veterans Foundation, The Enham Trust, Allied Service Trust and an Ambassador for Changing Faces. Most recently he helped to set up Care After Combat – a charity for veterans.

Simon Weston's story has been well publicised and he has been the subject of several major BBC Television documentaries: Simon's War, Simon's Peace, Simon's Triumph, Simon's Return and in April 1999, Simon's Journey. In 2014 he was nominated by viewers on the BBC One Show to have his Portrait painted and hung in the National Portrait Gallery, and BBC documentary followed Simon and the process behind creating the portrait.

His autobiography, Walking Tall, was No1 in the best-selling list. Going Back was also a best seller being in the top 10 for eight weeks. He then wrote a series of fiction books with titles such as Cause of Death and Phoenix. Moving On was published in 2003 and saw Simon lay his Falklands ghosts to rest. Simon has also published 4 children's books - A Nod From Nelson, Nelson to the Rescue, Nelson at Sea and Get Fit With Nelson.

He has also provided the voiceover for a number of children's stories for CBeebies. In 2015 he embarked on a 20-date theatre tour across the UK which, given the success of the tour, then expanded into 2016.

A successful businessman too, Simon Weston currently runs his own security business in South Wales and is a director of Zappawoo, parent company of startup Zap Escapes, specialising in selling holidays to those with accessibility requirements.

Simon Weston's message is one of single-minded determination, to not only accept what is, but to turn that to your advantage. Simon's own career clearly demonstrates how a positive mental attitude can achieve great business goals.

His irrepressible humour, infectious enthusiasm and immediately engaging personality have made Simon the number one choice of many companies who invite him back to speak time and again. An inspiring and moving keynote speaker, Simon is also a wonderful and humorous after dinner speaker.

Simon is in demand as both a keynote motivational speaker and after dinner speaker. He has spoken for small Rotary clubs through to large PLC’s across the UK and Europe.

Popular Speech Topics Include:
• Overcoming Adversity
• Accepting Change
• Taking up the Challenges for now and the Future
• Liking the Person You Are (enjoy living in the skin you have)
• Diversity
• Bravery & Dignity

Today Simon Weston takes the opportunity to convey his story in order to motivate and encourage those, who like him, want to move to the next goal, whatever it may be!

The audience was spellbound and everyone marked Simon Weston in the highest category (excellent) in the feedback forms. I don't think we could have chosen anyone better to bring our conference to a close.

Simon Weston was the best motivational speaker that we have ever had and scored 100% on the speaker table.

Simon's talk was inspirational, moving and in parts very funny. It was a great start to our day and he left leaving the clinicians in the audience with a lot to think about.

Simon Weston was amazing, the whole organisation was in tears and laughter with his speech he was so inspirational everyone was so touched by his speech.

Yesterday was fantastic and everyone I have spoken to was really blown away by Simon, his story and the messages he shared. We would have loved to have given him longer, and it was great that he did address all 650 or so of our staff. We really appreciated the time given to various groups of young people he saw, a brilliant day.

Simon was absolutely brilliant and pitched his speech just where we wanted it – i.e addressing the children specifically as well as the wider audience. It's testament to him that not only did he hold them in thrall for 30 mins … but they all seem to have absorbed and remembered a lot of his key messages about self-belief and taking responsibility for getting the most out of life.

Simon Weson was fabulous and the response back from the team has been more than positive. Some said they had met their hero, one member of staff phoned his Dad and Simon spoke with him, couple of the girls cried. He was very funny as well and gave some really good messages.

Simon Weston was a massive hit with our guests and the only celebrity we've had to get a standing ovation before he got to the stage.

Clients often ask about purchasing books for giveaways and delegate packs. Below you’ll find a selection of products by Simon Weston CBE. Click the images to view on Amazon's website. For bulk orders, please speak with your Booking Agent.

How to book Simon Weston CBE for your event