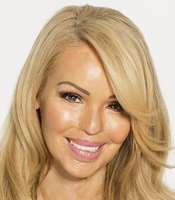 Katie Piper is a best selling author, inspirational speaker, TV presenter and charity campaigner who rebuilt her life after surviving a brutal attack in March 2008 at the age of 24, in which she was raped and had sulphuric acid thrown in her face.

She spent 2 months in the Burns Unit at the Chelsea and Westminster Hospital where she was placed in an induced coma in intensive care. Katie's surgeon and his team performed pioneering surgery on her, which was the first of its kind in the world, and Katie then went to an intensive burn rehabilitation unit in France to undertake a long period of scar management techniques.

She had to wear a plastic pressure mask for 23 hours a day for two years as part of her treatment. Her injuries also meant that she needed to be fed through a tube in her stomach as reforming scar tissue in her throat restricted her ability to eat and drink. The acid also left her blind in one eye.

Just over a year after the attack, Katie made the decision to give up her anonymity and share her story in a remarkable film for the Cutting Edge strand on Channel 4 called 'Katie: My Beautiful Face' which was watched by over 3.5 million viewers and nominated for Best Single Documentary at the BAFTA Television Awards in 2010.

Since then, Katie's life and career has gone from strength to strength. She has gone on to make a number of TV shows both here in the UK and internationally, she has written 3 number one best-selling books and her original autobiography has been translated into several different languages and sold in a number of countries.

Motivational Speaking
Successful organisations and successful people are often the ones who inspire positive thinking and can do attitudes. Katie Piper is a shining example of positivity in action, when faced with huge challenges and the kind of adversity most of us find hard to contemplate, she stayed positive.

How did she stay positive through such difficult times? Katie's moving and inspirational speaking sessions explore the tough times she has faced on her journey but will also highlight the methods that helped her up from rock bottom to where she is today.

Katie gives a truly inspiring, uplifting and motivating presentation and helps put into context some of the difficulties we all face from time-to-time professionally and personally.

Katie Piper talks about an experience that would break most people; she shed many tears but she also managed to laugh. Listen to a story of a young woman who appeared to have it all but ironically when it was taken away from her in seconds in a frenzied acid attack, again she discovered a fascinating inner strength and a life more fulfilled and happier than she ever could of hoped for.

Inspiring yes, but also intriguing and fascinating, one woman's loss of identity as she knew it and fighting for the right to still smile! Katie tells her story of physical and emotional recovery from her appalling experiences.

She movingly and inspiringly talks about the support she received, her own personal determination, and the work of health care professionals and support of those close to her.

Katie Piper's keynote was one of the highlights of the conference. “Beautiful”, “strong” and “inspiring” were some of the comments from the 550 attendees. We had expected that she would be a good speaker; we discovered she's a great one. She spoke frankly about what had happened to her and how she navigated dark times to find her current path. She lit up the room with her energy and passion and, best of all, left us with a feeling of empowerment as well as ideas on how to help others through her foundation.

Katie Piper was professional, relaxed and connected brilliantly with our audience of young people – they couldn't wait to get their pictures taken with her after the event! We've had lovely feedback since, with guests delighted by the warm and positive feeling she gave to the event. Thank you Katie!

The Oxford Union is fortunate enough to be visited by a large number of high-profile speakers every term. Few speakers, if any, I have seen at the Union have been as humbling and inspirational as Katie Piper. Her ability to tell her remarkable story with such confidence and hope is truly awe-inspiring.

It was an absolute pleasure working with Chris from NMP Live and Katie Piper for our event focusing on the empowerment and celebration of Women. Attendees described the talk as "incredible" and "inspiring". Booking was simple and Chris was on hand to guide us through the contract details. Katie was really professional and a joy to work with. Thank you both!

Clients often ask about purchasing books for giveaways and delegate packs. Below you’ll find a selection of products by Katie Piper OBE. Click the images to view on Amazon's website. For bulk orders, please speak with your Booking Agent.

How to book Katie Piper OBE for your event