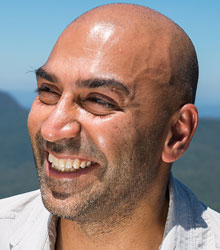 Amar Latif is a blind traveller, entrepreneur and television presenter with an astonishing track record of facing up to major challenges. Due to an incurable eye condition, Amar lost 95% of his sight by the age of 18. Through sheer determination, he has managed to turn an unpromising tale of loss, into one of inspirational achievement.
​
Amar became known to millions through the groundbreaking BBC2 reality series, Beyond Boundaries, a jungle endurance expedition across Central America. Screened worldwide, this was a gruelling 220-mile trek on foot across the rugged interior of Nicaragua, from the Atlantic to the Pacific coast. Amar had to ford swollen rivers, climb a 5,000 ft. active volcano and navigate the second largest lake in Latin America.

Amar took part in Celebrity MasterChef 2020, their first blind contestant, reaching the semi-final and the final six of the competition, attracting a legion of fans along the way. 2019 saw him team up with comedian Sara Pascoe in Travelling Blind to lead this BBC documentary through some of Turkey's most famous attractions, all in the name of showing Sara (and the hundreds of thousands of viewers who tuned in to join them) exactly how much there is to be gained by stepping out of your comfort zone and opening yourself up to new ways of seeing the world.

Amar was told that blind people couldn’t be accountants but he defied that, studying Maths and Finance at Strathclyde University. Proving everyone wrong, Amar spent seven years working at BT, finally heading up their Finance Division - managing a team of seven accountants and financial responsibility for multi-million pound business deals.

In 2004, Amar founded Traveleyes, the world’s first commercial tour operator to specialise in holidays for blind as well as sighted travellers. Traveleyes has opened the holiday travel industry to millions of blind and partially sighted people around the world, giving them the opportunity to walk with lions in Africa, sail the Ionian Sea and ski down Europe’s highest mountains.
​
​For his entrepreneurial achievements, Amar received The Outstanding Young Person of the World accolade (Business / Entrepreneurial category) from the Chamber of Commerce International and the prestigious Stelios Disabled Entrepreneur Award, presented by Sir Stelios Haji-Ioannou.

Amar works with schools around the world taking students on a wide range of travel adventures whilst having them describe the sights to other blind travellers. By broadening the mindset of young people today, Amar hopes to create a more accessible world for those with vision impairment in the future.

In presentations, Amar shows that determination and the right attitude can take you far in life. He has spoken for audiences from around the world, from Goldman Sachs and Lloyds Banking Group to the United Nations.

Though he has faced major challenges throughout his life, Amar has managed to turn an unpromising tale of inherited disability and loss into one of truly inspirational achievement.

Amar’s multi-faceted career has seen him work his way up through the corporate world, risk it all to build a successful and world-unique international business, and present successfully across Channel 4 and the BBC, including The Last Leg Goes Down Under and How to Get Fit Fast.

Amar’s multimedia presentations cover a wide range of topics, including entrepreneurship, motivation and inspiration, inclusive design, world travel, equality and diversity. All of Amar’s humorous speeches are relatable, fast-paced and supplemented with photos and videos of his exploits and adventures.

All of Amar’s motivational speeches are tailored to specific audiences and organisations, so rest assured that your audiences will be engaged with, motivated and inspired to move forward in both their personal and professional lives.

This has been the most inspiring and touching presentation I have ever experienced in my twenty five years of working in this company.

I cannot thank you enough. I can say with confidence that Amar’s speech was the highlight of the day for many - I believe it is going to be something that people will be talking about for a long time!

Amar’s speech ‘Obstacles! I Can’t See Any Obstacles’ was a hugely inspiring keynote address, which was both motivational and uplifting.We have received extremely positive feedback from audience members, with a number being so touched by his personal story that they would be keen to see him come back to Goldman Sachs in the future so that he can share his story with a wider audience.Most pleasing is the fact that it has now inspired a number of individuals to become more actively involved in forwarding the disability agenda at Goldman Sachs.

I wanted to thank you for speaking to us at Barclays Capital. It was great to meet you and we have had some really positive feedback from the attendees, all of whom found your talk incredibly motivating. As a result we have boosted our Disability Awareness Forum membership significantly and we will be able to build on this for future events.

Amar Latif did a terrific job of engaging our audience and everyone I’ve had a chance to speak with really enjoyed his talk and felt it was motivational. He struck the right tone, was personable and relatable.

To say it was inspiring doesn’t do Amar justice. Not only did he bring to life some of the challenges he has faced and the accessibility pitfalls many organisations fall into but did so with such humour and charisma that his audience was totally won over. He shows that determination and the right attitude can take you far in life. Inspiring!

A very big personal thank you for your presentation at our dinner on Friday night. Your speech contained a good mix of humour with a powerful message of tenacity. We asked for a presentation about entrepreneurship, being a Scot and coming back to Scotland. This was all delivered in a very relaxed and professional fashion. We have had a lot of feedback from our audience commending us on the choice of speaker.

Your words have crystallized the resolve felt and strengthened at this UN Convention, and your wonderful words, your poetry and your humour have challenged us to make the speakers podium accessible to everyone. Thank you for providing such an inspiring close to our proceedings.

How to book Amar Latif for your event