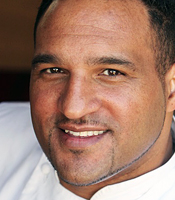 One of Britain's highest profile chefs, Michael Caines is a two-Michelin-starred head chef at Gidleigh Park and a past contestant on the Great British Menu.

Widely regarded as one of Britain's best working chefs, in partnership with hotelier Andrew Brownsword, Michael has created a group of individual boutique ABode hotels throughout the United Kingdom. Each has a Michael Caines Restaurant, Michael Caines Champagne and Cocktail Bar, MC Café Bar, and MC Boutique and/or MC Tavern.

However, it wasn't an easy path to fame for Michael. Early in his cooking career, due to his hardworking ‘workaholic' nature, he lost his right hand in a car accident after falling asleep at the wheel of his car. For many chefs, that would have been a career-ending event, but he persevered and was determined to overcome the obstacles that lay ahead.

Only two weeks after the accident he was back at work, and the prosthetic replacement limb which he had fitted has not affected his astonishing rise to the top. Today, Michael Caines' career looks ever starrier, with plans of expansion and plenty of earned critical plaudits.

Born in Exeter, Michael Caines was adopted into a family where his mother nurtured his love of cooking. He attended Exeter Catering College, earning himself the accolade ‘Student of the Year' in 1987, which was followed by three years under his mentor Raymond Blanc at Le Manoir aux Quat' Saisons in Oxfordshire, before moving to France for a further couple of years, learning his profession under the guidance of such superstar chefs as the late Bernard Loiseau in Saulieu and Joël Robuchon in Paris.

Michael returned to Britain in 1994 to take up the position of Head Chef at Gidleigh Park. Gidleigh's restaurant was already rated amongst the most prestigious in the country so the position represented a massive challenge and opportunity.

With his classical French training in some of the finest restaurants in the world, and utilising the best and freshest local produce and products from the West Country, Michael has created a style that is uniquely his own, at once classic yet also highly innovative, a fact recognised with the award of a second Michelin star in 1999. In 2001 he won Chef of the Year at the prestigious Cateys Awards.

Michael founded Michael Caines Restaurants in 1999 and the next year opened his first signature restaurant Michael Caines at The Royal Clarence Hotel in Exeter. He was made a Member of the Order of the British Empire (MBE) in June 2006. Amongst numerous other recent accolades, Michael has cooked in 10 Downing Street for the Prime Minister, and he took part in ‘The Great British Menu' chef's competition broadcast on BBC2 for the honour of cooking for the Queen's 80th birthday.

Lympstone Manor marks the pinnacle of a career that has been simply scintillating. For years, Michael dreamed of his own country house hotel, and in 2017; that dream became a reality when it opened its doors after three years of hard work and planning.

Underlying Michael Caines' philosophy is a passionate belief that good food – and yes great food – should always be inclusive not exclusive, accessible to all, at whatever level.

Clients often ask about purchasing books for giveaways and delegate packs. Below you’ll find a selection of products by Michael Caines MBE. Click the images to view on Amazon's website. For bulk orders, please speak with your Booking Agent.

How to book Michael Caines MBE for your event