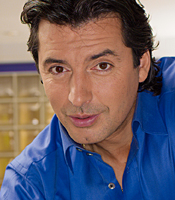 Jean-Christophe Novelli is a Michelin and 5AA Rosette award winning chef, whose attributes include AA Chef's Chef of the Year, European Chef of the Year finalist representing Great Britain and the prestigious Egon Ronay Dessert of the Year. He has won restaurant of the year several times and many other awards on numerous occasions.

He is described as making women swoon with the flick of his whisk, voted "The worlds Sexiest Chef" by New York Times and in the Sky viewers "Top 50 beautiful Men" poll.

Jean-Christophe Novelli began his exciting career at the age of fourteen as a baker in his home town of Arras, Northern France, becoming head private chef to Elie de Rothschild in Paris before the age of 20. Jean-Christophe's life changed completely when he arrived in Great Britain in 1983. Jean-Christophe spent a year helping his mentor and best friend Keith Floyd, taking care of his pub as head chef whilst Keith was filming his famous TV Shows.

Jean-Christophe's TV Career continues to go from strength to strength. The Hell's Kitchen star who featured on British screens in a breathtaking endurance documentary show 'Alive' which was filmed in extreme sub-zero temperatures in the snow-capped Andes mountains, has also appeared on the digital UKTV 'Food Uncut' and not forgetting XFactor 'Battle of the Stars', 'Family Fortunes', 'Al Murray', 'Ant & Dec Saturday night takeaway'.

Jean-Christophe Novelli is highly popular as a celebrity chef appearing at corporate events as well as private parties. All private/corporate days are different, but in general a typical day will start with tea/coffee on arrival then introductions. For corporate events guests/delegates can be split into two groups to create the healthy, fun competition or Jean-Christophe can leave you in a single group for a relaxed cookery lesson.

Jean-Christophe takes you through his sumptuous award-winning dishes and will match up wines with each course. And to cook with Jean-Christophe Novelli is all part of the entertainment!

I wanted to drop you a note to say again: A BIG THANK YOU for joining us at PurpleBeach! Our attendees were truly inspired by you – and especially felt they made a connection with what you shared.

Clients often ask about purchasing books for giveaways and delegate packs. Below you’ll find a selection of products by Jean-Christophe Novelli. Click the images to view on Amazon's website. For bulk orders, please speak with your Booking Agent.

How to book Jean-Christophe Novelli for your event

To book Jean-Christophe Novelli, please submit an online enquiry, email bookings@nmp.co.uk or speak with one of our booking agents on +44 (0)1372 361 004.