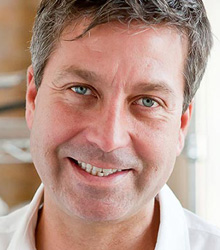 A hugely popular and influential figure on the UK culinary circuit, John Torode is best known as the straight-talking co-presenter and judge of BBC's MasterChef, Celebrity MasterChef & Junior MasterChef and for his well-established restaurants Smiths of Smithfield and The Luxe.

Masterchef is the biggest TV food brand in the world, the third highest iPlayer request for 2020 and it regularly tops ratings charts. John is also the presenter of A Cook Abroad: John Torode's Argentina and The A to Z of TV Cooking for BBC2. He is also a regular guest chef on ITV's This Morning, appearing both in studio as well as out and about on location with his cookery travel segment Torode On The Road.

Australian by birth, John is credited as one of the main players in introducing Australasian food to the UK in the mid-1990s. In 1992 he joined the Conran Group, starting out at Pont de La Tour before becoming Sous Chef at Quaglino's. In 1995, John became Head Chef for the launch of Mezzo in Soho; at the time one of Europe's largest restaurants.

He opened Smiths of Smithfield in 2000. The four-floor Grade-II listed restaurant, private dining room and café, located in the heart of Smithfield Market, continues to be a roaring success and a firm fixture on both the restaurant and bar scenes. John's second restaurant venture: another multi-storey operation, The Luxe opened at Spitalfields Market in September 2009.

John Torode became a familiar face to TV audiences back in 1996 as the resident chef on ITV1's This Morning with Richard and Judy; a role in which he continued for four years. Since 2004 John has paired up with Gregg Wallace, handing out feedback, criticism and support to hundreds of hopefuls aiming to be crowned MasterChef (or indeed Celebrity MasterChef) and is also the judge and co-host of CBBC's Junior MasterChef.

John is passionate about sourcing the best of British produce, particularly within the meat industry, where he has long been a champion of rare breeds. In his quest to source the very best produce whilst at Smiths, he built strong relationships with many small farmers & butchers throughout the UK and aimed to share his knowledge through his widely distributed "Fine Meat List".

John's third cookbook, John Torode's ‘Beef’ and other bovine matters, not only gives us every which way to cook with beef but also gives the history and importance of great and rare breeds, butcher's recommended cuts and true head to tail eating. The follow-up book, John Torode's Chicken and Other Birds needs no explanation!

John's TV programmes regularly attract a huge audience. Indeed MasterChef's popularity has placed John & Gregg on the front cover of several magazines including the Radio Times, spawned several cookbooks to date (including MasterChef Cookbook, MasterChef At Home, MasterChef Kitchen Bible, MasterChef EveryDay & MasterChef Cookery Course). Sainsbury's Magazine readers even voted MasterChef as the Top TV Food Show of the Decade and it has been included in the Top Ten list of the most Sky Plussed shows of the year.

A well-known food writer, John is a regular magazine contributor and has supplied numerous articles for many national newspapers.

John Torode is a popular celebrity chef for corporate, private and public events, including culinary demonstrations, informative talks plus interactive Q&A sessions. He was a member of the judging panel for the Glenfiddich Food & Drink Awards and appears each year at MasterChef Live in London and the BBC Good Food Show in Birmingham and Glasgow.

Virtual Celebrity Cookalong Sessions
Since the Covid-19 pandemic when everything was forced online during the numerous lockdowns and people were working from home, John became sought-after for hosting virtual cookalong sessions, bringing his creative cuisine right into peoples homes.

For these unique and intimate events, John can offer a suggested menu featuring very easy two or three course meals plus side dishes and suitable accompanying drinks.

John Torode’s cuisine is diverse, from Asian flavours to modern European and from pies and easy puds. He can also offer seasonal variations and give cheeky tips and bluffers’ guides so that it’s a fun learning experience for everyone.

John is a ‘double A side’ … aspirational but achievable! In his company, everyone feels quite comfortable even with a MasterChef judge cooking alongside them.

Please send our sincerest thanks to John and your wider team. This has been an absolutely brilliant event and we sincerely thank you all for your time and efforts. This was genuinely one of the best nights PagerDuty EMEA team had and we sincerely can't thank you and the team enough! John had a really great presence and brought a lot of joy so thank you.

Clients often ask about purchasing books for giveaways and delegate packs. Below you’ll find a selection of products by John Torode. Click the images to view on Amazon's website. For bulk orders, please speak with your Booking Agent.

How to book John Torode for your event