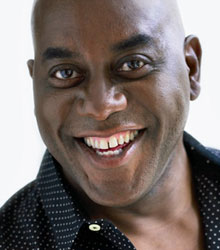 One of the nation's all-time favourite television chefs, Ainsley Harriott has become a much-loved face on our screens as the presenter of Ready Steady Cook and several other series. His recipe books have sold over 2 million copies worldwide and include the Feel-Good Cookbook, Ainsley's Barbecue Bible, Meals in Minutes, Low-fat Meals in Minutes, All New Meals in Minutes, Big Cook Out, the Friends and Family Cookbook and Just Five Ingredients.

While watching Ainsley Harriott in action, two obvious traits stand out: His flair for performing, which he inherited from his musician/actor father, and his love of food, which he learned from his mother by helping her out in the kitchen and learning to cook at a young age.

Ainsley was born in London, also the city in which he began his culinary career as a junior trainee at Verrey's in the West End. He moved to the elegant Strand Palace hotel before taking a break to tour Europe as part of a musical duo. Upon his return to England, he continued his performing pursuits as a member of "The Calypso Twins”, racking up several TV credits, a record release and a prominent position on London's New Comedy circuit.

Cooking remained his first love, and while continuing to rise in the ranks of London's top hotel chefs, Ainsley started his own catering company, creating delicacies for clients ranging from pop stars to royalty.

Television came calling soon after, and appearances were in abundance, however it was the hugely popular Ready Steady Cook and Can't Cook - Won't Cook for which he became best-known.

Ainsley Harriott was awarded a MBE for services to broadcasting and the culinary arts in the New Year Honours List 2020.

In addition to personal appearances and cookery demonstrations, Ainsley can present a live version of Ready Steady Cook at your next corporate event!

Clients often ask about purchasing books for giveaways and delegate packs. Below you’ll find a selection of products by Ainsley Harriott MBE. Click the images to view on Amazon's website. For bulk orders, please speak with your Booking Agent.

How to book Ainsley Harriott MBE for your event