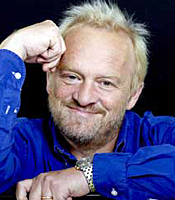 Antony Worrall Thompson is a well-known restaurateur and television chef. Appearing on Ready, Steady Cook frequently. He is the resident chef on BBC 2 Food and Drink programme. He has also appeared on over 200 programmes for the Carlton Food Network and he has captained Radio 4's quiz programme, 'A Question of Taste' as well as appearing on Radio 4's 'Loose Ends' and has made guest appearances on many television programmes.

Antony has written many books including, Modern Bistro Cookery, Supernosh, and 30 minute menus, based on his Sunday Times Column. Antony's most recent cookery book is The ABC of AWT for Hodder Headline published in October 1998. He is also currently writing a weekly column for The Sunday Express Magazine, as well as The Saturday Express and also writes monthly articles for The Grocer Magazine and Theme Magazine, Taste.co.uk and handbag.com.

His first Restaurant was Ménage à Trois, famous for serving starters and puddings, and since then Antony has been responsible for some of London's best known restaurants. These include, 190 Queensgate, dell'Ugo, Zoe, Drones and The Atrium. He is no longer associated with any of the above restaurants but he runs his own restaurant called "Wiz" in West London with his wife, where he is frequently to be found behind the stoves.

Antony is head of Wiz Events, which organises exclusive outside catering and corporate events, as well as Wiz Solutions offering advice to pubs, restaurants and the catering trade.

Antony is President of Euro-toques. In December 1987 he was awarded the most prestigious accolade: the Meilleur Ouvrier de Grande Bretagne (MOGB) - the chef's Oscar - and is currently one of only seven to have merited this lifelong title so far. He was Vice-Chairman of The Restaurateurs Association.

Antony is married to Jay, and lives in Oxfordshire with their two children.

he was brilliant, a real genuine nice guy, put on a great food demo. Will have him back next year for sure!

Clients often ask about purchasing books for giveaways and delegate packs. Below you’ll find a selection of products by Antony Worrall Thompson. Click the images to view on Amazon's website. For bulk orders, please speak with your Booking Agent.

How to book Antony Worrall Thompson for your event

To book Antony Worrall Thompson, please submit an online enquiry, email bookings@nmp.co.uk or speak with one of our booking agents on +44 (0)1372 361 004.