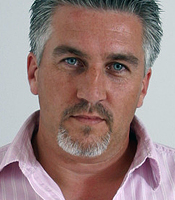 As a judge on BAFTA award-winning The Great British Bake Off, Paul Hollywood knows a thing or two about baking. As head baker at some of the most exclusive hotels including Cliveden, Chester Grosvenor and The Dorchester, Paul gained a reputation as one of the country's finest artisan bakers.

Coming from a long line of Bakers, with a chain of shops on the East Coast of England, Paul Hollywood originally trained as a sculptor before joining the family business. Following his apprenticeship and success at some of the UK's top hotels, Paul took the opportunity to travel extensively through Cyprus, Egypt and Jordan, visiting remote villages to discover ancient techniques for baking bread and, on one occasion, travelling to a Bedouin encampment and baking in the desert on an upturned cooking pot.

On his return to the England, Paul went on to launch the Paul Hollywood Artisan Bread Company supplying upmarket department store Harrods, amongst others, with his own branded bread.

He began his media career on Carlton Food Network and Taste in 2002 where he co-presented two TV series with James Martin.

Paul has been a judge on The Great British Bake Off since it started on BBC2, and then in 2014 moving to a new home on BBC1, before relocating to Channel 4 in 2017. He has also judged Junior Bake Off and celebrity versions for Sport Relief and Comic Relief all alongside Mary Berry.

In May 2013 he appeared as judge on the new US version of Bake Off, The American Baking Competition which aired on CBS. His series Paul Hollywood's Bread aired in the UK on BBC2 in March 2013 and in Autumn 2013 Pies & Puds launched on BBC Daytime running at teatime for 20 episodes and was repeated on Saturdays and Sundays.

In 2005, he authored a best-selling book ‘100 Great Breads' which has been published in ten countries and seven languages, and was voted ‘top bread and pastry book' by the Gourmand Academy. His second book ‘How to Bake', published by Bloomsbury, was published in summer 2012 and quickly went on to the top of the bestseller lists. The book to accompany his Bread series came out in February 2013 with the Pies and Puds book hitting shelves in October 2013 to coincide with the programme of the same name. Paul Hollywood’s British Baking came out in October 2014 and The Weekend Baker was published in 2016.

Car Nation was a nod to his love of classic cars and 2020 saw the launch of his food travelogue Paul Hollywood Eats Japan on Channel 4.

Paul makes regular contributions to The BBC Good Food Magazine, Olive Magazine, Waitrose Magazine and has written for both The Observer and The Telegraph.

Paul Hollywood advises and trains at corporate level, working extensively with the Flour Advisory Board as well as hosting and presenting large demonstrations and award ceremonies.

Clients often ask about purchasing books for giveaways and delegate packs. Below you’ll find a selection of products by Paul Hollywood. Click the images to view on Amazon's website. For bulk orders, please speak with your Booking Agent.

How to book Paul Hollywood for your event