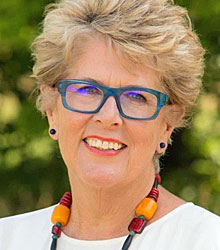 Although Dame Prue Leith is currently best known as one of the judges on the hugely successful TV series ‘The Great British Bake Off’, there is a long and illustrious career including experience as a restaurateur, chef, caterer, television presenter/broadcaster, businesswoman, journalist, cookery writer and novelist that led her to this position.

In 1960, Prue moved to London to attend the Cordon Blue Cookery School and started a business supplying high-quality lunches, which grew to become Leith's Good Foods. Nine years later she opened Leith's, her Michelin-stared restaurant in Notting Hill, and in 1975 she founded Leith's School of Food and Wine, which trains professional chefs and amateur cooks

She ended up with the Leith’s group of companies — School of Food and Wine, Leith’s Events and Parties and Leith’s Restaurants. Alongside running the group she was a successful writer, with food columns for the Daily Mail, Sunday Express, Guardian and the Mirror, and twelve cookbooks under her belt.

Leith's Cookery Bible, written with Caroline Waldegrave, was a particular standout success, has stood the test of time as a classic authoritative and comprehensive cookbook for seasoned cooks and beginners, chefs and caterers.

The first woman appointed to the British Railways Board in 1977, Prue Leith set about improving its much-criticised catering. As a result the catering division, Travellers Fare, was detached from the hotels business in 1982, and innovative outlets were created, including Casey Jones and Upper Crust

Prue was a sought-after non-executive director for other major companies including Safeway, Whitbread, Woolworths, Belmond (formerly Orient Express Hotels) and others.

She also became heavily involved in food in education. When chair of the Royal Society of Arts she founded and chaired the charity Focus on Food (now part of the Soil Association) which promotes cooking in the curriculum. She also started, with the charity Training for Life, the Hoxton Apprentice – a not-for-profit restaurant which for 10 years trained the most disadvantaged long-term unemployed young people.

When Prue sold her business in 1993 to focus on her fiction writing she employed 500 people, her flagship restaurant had a Michelin star and Prue had won the Veuve Clicquot Businesswoman of the Year award, and been honoured by HM The Queen with first an OBE and then a CBE.

In her time Prue Leigh has chaired the Royal Society of Arts, The Restaurateurs Association, UK Skills, Forum for the Future, Ashridge Management College, and 3E’s, a not-for-profit education company that turned round failing schools and the School Food Trust, set up by the British Government to change the diet of the nation through teaching children at school about food and persuading them to eat healthily.

In 2017, she accepted the position of Queen Margaret’s University’s Edinburgh Chancellor, reflecting the affinity of her interests and experience with the University's expertise in food and drink, sustainable business, creativity, the arts and culture, and one of its fundamental values, social responsibility.

In 2021 Prue Leigh was honoured with a ‘Damehood’ in the Queens Birthday Honours list for her services to food, broadcasting, and charity.

Clients often ask about purchasing books for giveaways and delegate packs. Below you’ll find a selection of products by Dame Prue Leith DBE. Click the images to view on Amazon's website. For bulk orders, please speak with your Booking Agent.

How to book Dame Prue Leith DBE for your event