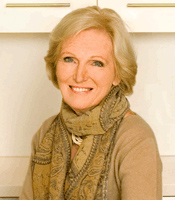 Mary Berry CBE is the doyenne of family cookery, and specialises in Aga cookery, cakes and desserts. She is a regular contributor to TV and radio food programs and to-date has written over 70 best-selling cookery books, including the Classic Aga Cookbook and Mary Berry's Complete Cookbook. Her first - The Hamlyn All Colour Cookbook - was published in 1970.

Mary studied catering and institutional management at Bath College of Domestic Science. Her first job was at the Bath electricity board showroom, moving on to conducting home visits to show new customers how to use their electric ovens. She would typically demonstrate the ovens by making a Victoria sponge, a technique she would later repeat when in television studios! Mary’s first television series Afternoon Plus - with Judith Chalmers - was broadcast in the early 1970s and was an instant hit. She continued through the 1970s,1980s and 1990s, writing cookery books and filming television series for the BBC, often from her home.

Mary has been cookery editor of Ideal Home and was a member of the Council of Food from Britain. In the 2012 Queen's Birthday Honours list she was appointed Commander of the Order of the British Empire (CBE) for services to culinary arts. In 2012, she was given an honorary degree for lifelong achievements in her field by Bath Spa University.

Clients often ask about purchasing books for giveaways and delegate packs. Below you’ll find a selection of products by Dame Mary Berry DBE. Click the images to view on Amazon's website. For bulk orders, please speak with your Booking Agent.

How to book Dame Mary Berry DBE for your event