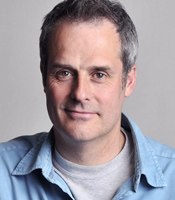 Phil Vickery has been a part of the ‘This Morning' family for over 11 years, with viewing figures in excess of 3 million, he is regarded as one of Britain's favourite chefs.

Phil is a chef trained to the highest standards. Phil began his career as a Commis Chef at The Burlington Hotel on Folkestone seafront. He worked his way up the kitchen ranks and on his journey has worked in the very smart Michael's Nook hotel in Grasmere, Cumbria, the Michelin starred Gravetye Manor in East Grinstead and Ian McAndrew's Michelin starred restaurant ‘74'.

Phil's first TV appearance came after he was invited to fill in for Keith Floyd on the Breakfast Programme, and over the past 15 years he has appeared on the BBC ‘Holiday Programme', ‘Ready Steady Cook', ‘Proof Of The Pudding', his own series ‘Phil Vickery's Pudding Club' and of course ‘This Morning', presenting live and pre-recorded cookery items.

Phil is a prolific and highly regarded cookery author having written 14 books, including his most recent, ‘Phil Vickery's Guide to Outdoor Food' – he also finds time to farm and spends many hours working on the land and with his livestock.

He is the leading authority on Gluten-Free products and recipes, his books sell worldwide, and have won many awards. He is the National Food Ambassador for Coeliac UK www.coeliac.org.uk.

Phil is a vastly experienced corporate and brand ambassador having worked for numerous blue chip companies and brands as well as being hugely popular for his live food demonstrations.

Inspirational and genuinely warm, Phil Vickery demonstrated real enthusiasm for encouraging children and young people to enjoy good food; delivering a serious message with style and good humour. His relaxed and approachable nature made him the ideal personality for this event – engaging with a wide variety of visitors, delighting the audience and entertaining the media!

Clients often ask about purchasing books for giveaways and delegate packs. Below you’ll find a selection of products by Phil Vickery. Click the images to view on Amazon's website. For bulk orders, please speak with your Booking Agent.

How to book Phil Vickery for your event