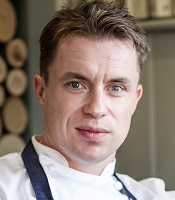 When James Tanner became the latest recruit to the ever-popular TV series Ready Steady Cook (BBC1) the show drew in close to 3 million viewers per episode. Since then he has appeared on Step up to the Plate, Saturday Kitchen (BBC 1), Something for the Weekend, Put Your Menu Where Your Mouth Is, Take on the Takeaway (BBC 2), Country House Sunday (ITV), and is a resident chef on Lorraine (ITV).

In 2010 James' career took off with his own range of products with Matalan incorporating everything from cookware to kitchen textiles with a new range hitting the shops in 2011. Previously, he was a regular co-presenter for Great Food Live for UKTV Food. James and his brother Chris filmed their own 15 part series The Tanner Brothers, broadcast on the Carlton South West region in December 2003, and repeated on Great Food Live in 2004. It also ran on UKTV Style.

James Tanner is constantly in demand and is regularly asked to work with top brands. In 2012 he was the face of Blossom Hill's Summer campaign, and in Autumn 2012 launched the new range of Heinz soups with a series of soup-inspired recipes. In 2013 he worked with Flora Buttery.

In 1999, aged 23, James and his brother Chris realised their boyhood dream and opened Tanners Restaurant in Plymouth. This was the perfect opportunity to put into practice their excellent Roux Brothers training. It was voted as the Best Restaurant in the UK for 2007/8 in the AA Awards and continued to be hugely successful until the brothers decided to sell it in 2014 to focus on their other businesses.

James and Chris now have The Barbican Kitchen in Plymouth which they opened in 2006, Quayside Fresh farm shop and The Catch fish and chip shop in Looe, and their latest venture, The Kentish Hare in Bidborough, Kent, opened in May 2014 and within 8 months was listed in the Michelin pub guide, awarded 2 AArosettes, and won the ‘One to Watch' award 2015 in the Budweiser Budvar Top 50 Gastropub Awards.

James is a regular at food festivals up and down the country, and in 2014 began work as the newly appointed Chef Director of Salon Culinaire at the Hotelympia show. He is also the chairman of judges for The Nestlé Professional Toque d'Or, an annual competition for young catering students.

He is passionate about using local, seasonable and sustainable produce of excellent quality. James was involved in the first Red Tractor Week, supporting farmers, processors, retailers and distributors who work together to maintain and raise production standards, and in May 2015 hosted the Western Daily Press Food and Farming Awards.

Clients often ask about purchasing books for giveaways and delegate packs. Below you’ll find a selection of products by James Tanner. Click the images to view on Amazon's website. For bulk orders, please speak with your Booking Agent.

How to book James Tanner for your event