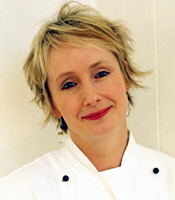 A former chef and cookery demonstrator, Lesley's lively personality makes her a popular television cook and a regular member of the team on Ready Steady Cook (BBC 1), and a frequent guest on Good Food Live (UK Food Channel), and Saturday Kitchen (BBC2).

She studied French Cuisine for three years at Ealing College, which included time as a chef at the Waldorf Hotel. During this training period, she won one gold, and two silver medals at Hotelympia and was awarded a scholarship to the Hotel Intercontinental, Dusseldorf.

In 1978 Lesley joined Prue Leith's Restaurant and was quickly promoted to position of senior chef. She then worked as a freelance corporate chef and caterer for government officials before joining Leith's School of Food and Wine as an instructor, rising to head teacher. Here she perfected her cookery demonstration and food photography skills. She often represented British food at international cookery displays, taking as her theme 'good food for health's sake'.

She has worked in television since 1989. In addition to GMTV and Bazaar her work has included writing and presenting a series of network Cookery Club programmes for Chrysalis TV, resident cook for Lifestyle Channel and currently for UK Living. In 1992 she teamed up with Malcolm Gluck to present the Superplonk video, the guide to 101 top supermarket wines, produced by Chrysalis.

During 1994 she co-presented a 12 part TV series for Anglia about healthy living, called Bodyworks. She was one of the major presenters of Can't Cook Won't Cook and is a Ready Steady Cook regular. In 1999 she completed the incredibly successful Ready Steady Cook Roadshow playing to packed theatre houses across the UK. Lesley also co-presented Surprise Chefs for the Meridian region and has guested on Food & Drink, flying to Thailand for the programme to record a number of Thai cooking demonstrations, Celebrity Ready Steady Cook, Light Lunch and the BBC daytime show Who'll Do The Pudding. She was also the resident chef for the annual BBC Primetime Show Weight of the Nation. She has recorded three of her own series for Carlton Food Network, Real Food, Flavours from Abroad and First Taste.

Lesley has written a number of books including Fifteen Minute Feasts for BBC Books, Four Seasons Cookery for BBC Books, Sainsbury's Quick and Easy Food for Friends (Martin Books, 1995), Weight Watchers Carefree Christmas (Simon & Schuster, 1996), Ready Steady Cook Book 3 (BBC Books, 1997), and Weight Watchers Store Cupboard Cookery (Simon & Schuster, 1997). These were followed by Classic Starters and Juice Up Your Energy Levels both for Orion and The Essential Pasta Book for Weidenfeld & Nicolson. Broader Than Beans a major vegetarian cook book was published by Headline in 1998 and the follow up Cooler Than Chillies was published 2000. Her last book New To Cooking was published by Ryland, Peters and Small in 2001 and a new book for Sainsburys Healthy Simple Ways to Success was published in September 2003. She has also launched a series of paperback cookbooks with food retailer Julian Graves.

Over the years Lesley has worked with a number of high profile brands; she is currently an ambassador for DuPont Teflon, and was the face of Lidl Supermarkets 2010-2012. She regularly appears at food festivals around the UK, including Be:Fit London in 2015, and she is Patron of the Christchurch Food & Wine festival.

Clients often ask about purchasing books for giveaways and delegate packs. Below you’ll find a selection of products by Lesley Waters. Click the images to view on Amazon's website. For bulk orders, please speak with your Booking Agent.

How to book Lesley Waters for your event