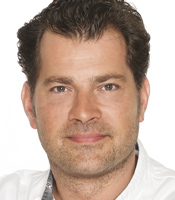 Ed Baines is the chef and owner of Randall & Aubin restaurant, champagne and oyster bar in London's Soho. The tall, dark and handsome restaurateur is regularly on TV and is best known for his role as a judge on ITV's hugely successful Britain's Best Dish with six series between 2007 and 2011, reaching viewing figures in excess of 3 million.

Ed was spotted for a media career in 1998. He is a prolific and natural television chef with a raft of appearances and three of his own titled series.

Ed Baines has appeared on Channel 5 News, The Alan Titchmarsh Show, What's Cooking? (Channel 4), Country House Sunday (ITV), Chefs: Put Your Menu Where Your Mouth Is (BBC1), and Country Show Cook Off, a primetime series for BBC 2. His other television programmes include: Lunch with Ed Baines and ITV's Ed Baines Entertains, as well as a regular chef on Lorraine for ITV. Ed also appeared on Taste the Nation and co-presented BBC Great Food Live including a series of short features in Scotland, Arizona, and Dorset.

He has written two books, Entertain, and Best of British, published by Kyle Cathie, and is currently working on a third book.

Ed credits his mother as one of his biggest influences and his passion for food stems from childhood trips to the Mediterranean, and sampling the broad range of fresh produce in London where he was raised.

The early part of Ed's career was spent looking for the toughest challenges and best training, taking him from a two year apprenticeship with Anton Mosimann at The Dorchester Park Lane, to working on the Wind Spirit in Monaco and at hotels in Juan-les-Pins and Queensland, then to Bibendum and the River Café in London, then becoming the official Armani chef in London and Milan.

After this rigorous experience Ed Baines was in good shape to meet the challenge of setting up and running the kitchen at Daphne's in Kensington where he used the continental philosophy of only the best seasonal ingredients and a delicate approach to all things food. With Ed's passionate leadership and a dedicated team, Daphne's became London's most successful restaurant throughout the 90's.

In 1996, along with his business partner, Ed Baines opened Randall & Aubin Soho. The restaurant remains a huge success and they have since launched a global expansion programme.

Ed is an excellent speaker on food topics and business issues within the catering and service industries and is known for his work with brands such as Canderel and Philadelphia. In 2015 he created ‘Purple Sauce’ for Premier Inn’s breakfast offering, which launched in June.

With an international reputation, Ed is often in demand for food events worldwide, appearing at Jones the Grocer UAE and Delicious Festival South Africa in 2013, events in Singapore, Mauritius, and at Barbados Food Wine and Rum Festival in 2014, and most recently on board SAGA’s Sapphire cruise ship in 2015.

Clients often ask about purchasing books for giveaways and delegate packs. Below you’ll find a selection of products by Ed Baines. Click the images to view on Amazon's website. For bulk orders, please speak with your Booking Agent.

How to book Ed Baines for your event