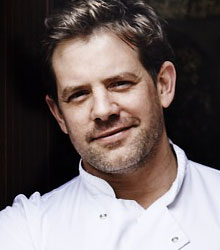 Matt Tebbutt gained a diploma at Leiths School of Food and Wine in London, before working for some of London’s most prestigious restaurants. This includes Marco Pierre White at the Oak Room and Criterion, and Alastair Little who he cites as the greatest influence on his cuisine.

Matt’s first solo cook book, ‘Matt Tebbutt Cooks Country’, featuring all of his favourite recipes is still available, as is his second book ‘Guilty Pleasures’. He is also a regular contributor to food and travel magazines and does demos and appearances at various food shows/festivals up and down the country.

He owned and ran The Foxhunter restaurant in Nantyderry near Usk in South Wales for over 10 years. The restaurant won a number of awards including the AA Restaurant of the Year for Wales.

Clients often ask about purchasing books for giveaways and delegate packs. Below you’ll find a selection of products by Matt Tebbutt. Click the images to view on Amazon's website. For bulk orders, please speak with your Booking Agent.

How to book Matt Tebbutt for your event