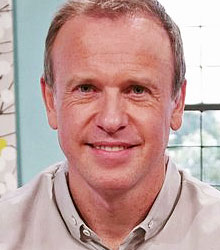 Best known as the host of Channel 4's Sunday Brunch, prior to the move to C4, Tim Lovejoy hosted BBC2’s Something for the Weekend for 6 years and also gained a huge following from his time producing, writing and presenting Soccer AM on Sky Sports.

Away from the TV, he hosts his hugely successful "Dear Lovejoy" weekly podcast.

He began his television career as a covering VJ for MTV UK. He then joined Planet 24, working as a researcher for The Big Breakfast before going on to producing the show.

Lovejoy has written three books and done 2 DVDS. His first book was Lovejoy on Football: One Man's Passion for the Most Important Subject in the World (published by Century, London, 2007). The two other books are linked to his TV series; "Lazy Brunch", 'co-authored' with chef Simon Rimmer. (Quadrille Publishing, London, 2008) and "Something for the Weekend: 60 fabulous recipes for a Lazy Brunch", also 'co-authored' with Rimmer (Quadrille Publishing, London, 2009).

His name is also associated with two DVDs on football: Lovejoy and Redknapp's Best Of Football, (2007) and Tim Lovejoy's Football Managers Uncut - A Guide to the Game's Greatest Gaffers (2008).

Clients often ask about purchasing books for giveaways and delegate packs. Below you’ll find a selection of products by Tim Lovejoy. Click the images to view on Amazon's website. For bulk orders, please speak with your Booking Agent.

How to book Tim Lovejoy for your event