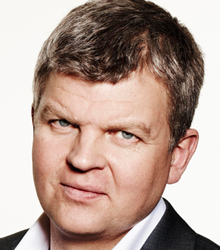 Adrian Chiles is one of television's most versatile and sought after presenters. He signed to ITV last June to present a range of high profile programming, including ITV's football coverage of the World Cup, Champions League and FA Cup, as well as fronting Daybreak with his long time on-screen partner Christine Bleakley. Earlier this year Adrian also hosted That Sunday Night Show on ITV1, in which he is joined by three top-drawer guests to provide an entertaining look back over the week's top news stories. A second series has been commissioned for the Autumn.

Adrian was the originating host of The One Show (BBC One) from August 2006 to April 2010 and until this April hosted MOTD2 (BBC One and Two) and The Apprentice: You're Fired (BBC Two).

He spent 13 years presenting the daily business news programme Working Lunch (BBC Two) and has written and presented several one-off documentaries and documentary series for the BBC including Asian Millionaires (BBC Two), Working in the Dark (BBC One), So What Do You Do All Day (BBC Two), It Beats Working (BBC One), Royal Millions (BBC One), and What Ron Said (BBC One).

Adrian Chiles was a pleasure to work with. He took time before the event to understand our requirements and our audience... keeping a long evening flowing well. Professional, witty and happy to meet with delegates afterwards... I would happily recommend Adrian as a host”

Clients often ask about purchasing books for giveaways and delegate packs. Below you’ll find a selection of products by Adrian Chiles. Click the images to view on Amazon's website. For bulk orders, please speak with your Booking Agent.

How to book Adrian Chiles for your event