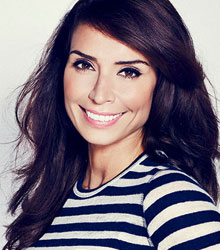 Christine Lampard began her TV career in Northern Ireland on shows such as Let Me Entertain You, First Stop and Sky High.

Christine presented The One Show on BBC One for three years until 2010, as well as appearing on Strictly Come Dancing as part of Sport Relief. Christine famously water-skied across the English Channel in March 2010 raising over £1.5 million pounds.

In 2010 she signed to an exclusivity deal with ITV, where she co-hosted Daybreak as well as a number of shows such as The National Movie Awards and one-off specials on Duran Duran, Simply Red and Michael Flatley, and was crowned Ultimate TV Presenter at the Cosmopolitan Women Of The Year Awards.

Christine joined Phillip Schofield to co-host three hugely successful series of Dancing On Ice(ITV1 2012-2014). The duo continue to work together as co-presenters on ITVs annual fundraiser, Text Santa and with Christine as regular cover for Holly on This Morning.

Christine presented the ITV Factual Series Off The Beaten Track exploring undiscovered tourist hot spots around the UK, and filmed a one off special Roman Britain From The Air. Wild Ireland,for ITV1, saw her travel across the Wild Atlantic Way in Ireland, the show aired in 2015.

Christine is a regular panellist on the popular ITV daytime show Loose Women.

How to book Christine Lampard for your event