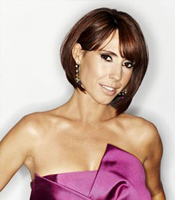 Alex Jones is best known as the co-host of the BBC's flagship magazine programme The One Show alongside Matt Baker and Chris Evans.

As a fluent Welsh speaker, her television career began working for Welsh Channel S4C, and she went on to present a variety of shows for the channel. Alex presented Tocyn, a stylised travel series offering alternative holidays; Chwa, a Welsh language extreme sport series; Salon, a style and fashion programme and in 2010 hosted The Big Welsh Talent Concert. She also co-hosted Jonathan with rugby legend Jonathan Davies during the 2010 Six Nations Championship and was a regular presenter on Real Radio GMG, Wales' largest commercial station.

In 2009 Alex took part in The Magnificent Seven, a BAFTA-winning series which saw seven celebrities travel to a ranch in Arizona to learn how to become cowboys. Whilst in the Wild West she recorded a spin-off children's series called Alex and the Cowboys, also for S4C. Alex went on to present BBC Wales' contribution to the Children in Need network programme from the Millennium Stadium.

In Summer 2010, Alex landed The One Show role and she hasn't looked back since. She presents the daily magazine show from London and has become a mainstay on the channel, presenting Eurovision results and Let's Dance for Comic Relief for BBC1.

Alex's popularity grew further when she was a semi-finalist on Strictly Come Dancing 2011, which she says was one of the "best times of her life". 2012 saw Alex dance at Buckingham Palace on The One Show.

In 2013 Alex appeared as a panellist on 8 Out of 10 Cats and co-presented Let's Dance for Comic Relief for the third year running.

How to book Alex Jones for your event