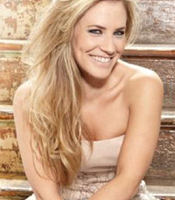 2013 was an exciting year for Georgie as she relocated to New York to join Regis Philbin on the daily live show Crowd Goes Wild, an original sports and discussion show on Fox Sport 1.   Prior to her move, Georgie travelled the globe presenting Sky Sports Formula 1 coverage for Sky Sports. She hosted her own pre-race weekend magazine show, The F1 Show, every Friday evening throughout the season, presented race coverage over race weekends and conducted weekly big name interviews for the channel.  Before her work on the Formula One coverage for Sky Sports, Georgie became a familiar face on Sky Sports News, anchoring the flagship programmes Afternoon Report and Evening Update from 3pm - 7pm every Tuesday to Friday.  Georgie was also a regular panellist alongside Freddie Flintoff, Jamie Redknapp and John Bishop on Sky 1's A League of Their Own presented by James Corden. A mixture of sports and comedy, the show is in its sixth series and Georgie still contributes to A League of Their Own when her schedule allows.  Her other roles with Sky Sports have seen Georgie host the A1 Grand Prix motor racing series, US Open tennis, Speedway World Cup and other live outside broadcasts including The Goodwood Festival of Speed, Superset Tennis and the Race of Champions at Wembley. Georgie was also the long-running voice of Sky Sport's Premier League Years.  Georgie is also a regular contributor on a variety of current affairs and discussion shows including Dermot O'Leary's Radio 2 programme, Richard Bacon's Radio5 Live programme, Channel 5's The Wright Stuff and ITV's This Morning.
Away from television, Georgie co-wrote her first novel The Twitter Diaries with Imogen Lloyd-Webber in May 2011. The book went on to become a best seller on Amazon.

Clients often ask about purchasing books for giveaways and delegate packs. Below you’ll find a selection of products by Georgie Ainslie. Click the images to view on Amazon's website. For bulk orders, please speak with your Booking Agent.

How to book Georgie Ainslie for your event