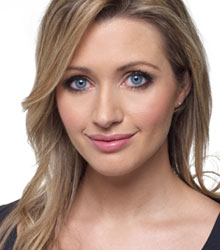 Hayley McQueen is one of the UK's leading female sports presenters and the first to have anchored live football from the Premier League, Champions League, UEFA Cup and FA cup.

A girls girl who is described as fun, warm and relaxed, with a dry sense of humour — never one to take herself too seriously — Hayley is currently a lead anchor on Sky Sports News and a presenter on Sky's coverage of the Champions League.

Daughter of former Manchester United & Scotland footballer Gordon McQueen, Hayley has experienced life both in front of and behind the camera as well as behind the scenes within the beautiful game itself. Her job has taken her around the globe reporting on and presenting some of the most high profile watched sporting events, as well as interviewing high profile sports people and celebrities including David Beckham, Usain Bolt, Jose Mourinho, Cristiano Ronaldo and Lord Sebastian Coe. She has come a long way since life as a production runner on 'This Morning'.

Hayley is a respected, experienced broadcast journalist & RTS award-winning producer who has worked her way up the industry ladder since graduating from University with a BA (HONS) degree in PR, Marketing & Journalism, later specialising in Broadcast Journalism & Media Law. She is one of only a handful of women in the UK to have anchored live football both in a studio & pitch side.

In her current role as a Sky Sports News presenter, Hayley McQueen thrives from being part of a live news environment and is regularly used to break the biggest stories, presenting the busy 5 hour popular day slot. Whilst at Sky Sports News she's anchored the daily evening 'Euro Report' throughout the 2012 tournament, was a regular presenter at the Stratford studio for the London Olympics, outside broadcast solo presenter on the League Cup, FA Cup & Champions League. She is now part of the Sky Sports presenting team on the much watched Champions League coverage & occasional presenter of Football First.

Her love of travel & career ambition led to a new role after MUTV presenting a daily live World Cup show for Al Jazeera Sport throughout the 2010 tournament with big name guests and daily viewing figures of over 100 million. She has since anchored many outside broadcasts from locations around the world.

A journalist first & foremost, Hayley has gained a reputation as a respectable broadcaster shying away from men's magazine shoots in order to maintain a wholesome respectable image & in turn longevity in her career.

Her popularity with viewers as a Sky Sports News presenter and a fondness for sharing obscure football trivia, has seen Hayley attract a large following on twitter.

Her first love is football but Hayley is also a fan of golf and rugby and a regular at Lancashire Cricket Club. She is actively involved with various ‘Football in the Community' projects and has a BA (Hons) degree in PR, Marketing & Journalism.

CORPORATE EVENTS HOST
Alongside her on-screen work, Hayley McQueen is in demand as a host of corporate and black tie events around the country. Her combination of professionalism, sporting background, experience, warmth and humour make her a very popular host. Her natural ability and experience in live broadcasting lend her perfectly for the corporate environment and she is a confident and experienced host and speaker, as well as an insightful facilitator.

Hayley's journalism degree coupled with her extensive experience in live broadcasting make her an accomplished and confident interviewer and a prolific speaker, including a recent speech at the world famous Oxford Union.

Hayley is very comfortable dealing with and interviewing high profile figures in the world of sport and beyond, in front of a varied audience. Her thorough approach and skilled interview technique guarantees thought provoking discussions on stage in Question and Answer sessions, of which she has hosted many.

Hayley McQueen has a lively personality but maintains the professionalism needed and it is her friendly manner that makes her an ideal host to put guests at ease at hospitality functions. Whether it's an awards ceremony, corporate press conference, evening function or panel discussion Hayley McQueen provides the ideal mix of style and professionalism.

We were all extremely pleased with Hayley and her hosting skills for our ceremony were absolutely spot on. She was a true professional and required no prompting, this helped us relax and made the afternoon very smooth running. She arrived in good time, spoke perfectly and she was more than we hoped for. We would be happy to welcome Hayley back to any future events we may have.

How to book Hayley McQueen for your event