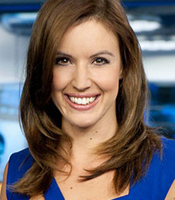 Away from sport, Charlie is most at home in entertainment and has found time to present from a number of high profile events including on the red carpet at the BRIT Awards 2009, White Air Festival for BBC 5 live and Action Zone UK which she co-hosted with Vernon Kay.

Charlie started out her career as a professional model and landed her first job in TV as an entertainment reporter for MTV. Charlie then became the face of Real Madrid International TV and fronted many of their commercial activities such as the award-winning Adidas Impossible is Nothing campaign with David Beckham.

In 2006,ESPN and Star Sports appointed her as the first ever live female football presenter in Asia and she became the main anchor for their live Premier League coverage, whilst also covering Motorsport, Golf and Basketball. She returned to the UK in 2007 to join Setanta and in 2009 she was selected to present ITV's coverage of the Red Bull Air Races before joining the Sky Sports team.

Corporate Experience
Charlie is an adept live presenter, MC, and host working for brands such as Nike and Adidas as well as LOCOG at their live events and various charity dinners and events.

Charlie is a frequent marathon runner and regular columnist for Running Fitness magazine. Charlie supports a range of charities including Bobby Moore Fund for Cancer Research and Women's Aid Federation of England.

Charlie Webster has been the host of the Women's Aid and Avon Empowering Women Awards for the past three years, since the launch... Charlie is an engaging host who manages what can be a very emotional and moving ceremony with confidence, humour and sensitivity.

Charlie Webster made such a difference to us… so personable, beautiful and lovely and really helped springboard Thomas and his voice to the public square. By winning the crowd over, which Charlie did with mastery, not only did Many Hopes make its mark in London, but Thomas had won half the battle already just by having listening ears; that was thanks to her command…

How to book Charlie Webster for your event