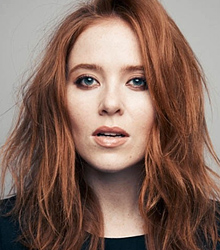 One of TV’s brightest rising stars, Angela boasts an impressive body of work that shows off her bright, funny and passionate personality. Angela brings a genuine interest and warmth to everything that she does.

Her intelligence, humour, quick-thinking and journalistic background means she quickly disarms interviewees allowing her to get the best out of the subject.

Following her 2015 role as digital host of The Voice UK, in 2016 Angela was announced as co-host of the legendary BBC2 show Robot Wars, alongside Dara Ó Briain. Angela is a regular reporter on BBC One’s The One Show, which has seen her tackling all sorts of subjects, from autism to art.

In 2017 she presented The One Show whilst Alex Jones was on maternity leave. She also has a returning strand on the show 15 Minutes of Fame, and you can listen to Angela on her regular Virgin Radio show, which she co-hosts with Russell Kane, on Saturday mornings.

Angela Scanlon’s first major documentary, OI GINGER, aired in 2014 on RTE to critical acclaim – the show trended worldwide on Twitter and showed off Angela’s playful presenting style and her ability to dig deep into a subject matter. The success of the show led to a follow-up series, Angela Scanlon: Full Frontal in 2015, where she tackled taboo subjects such as extreme makeovers, fitness and Tinder. A further series followed, Angela Scanlon’s Close Encounters, which saw her dive into the world of WWE with world champion Sheamus, head to NYC to chat books and babies with Dawn O’Porter and take on Katie Hopkins in a very honest and candid interview.

Angela actively supports the Irish Centre, ISPCC and Oxfam, has previously been a professional Irish dancer and stylist, and also enjoys finding time to read (mostly self-help books) and travel.

How to book Angela Scanlon for your event