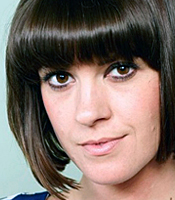 Television presenter and writer Dawn O'Porter started her media career after studying at Liverpool Institute for Performing Arts. Following college, where she dropped out in the third year, she moved to London and gained early work experience behind the camera on the TV show Baddiel and Skinner Unplanned.

She made her transition into television presenting by appearing on the Channel 4 comedy show Balls of Steel, which saw her testing the morals of British men. Following this, she went on to secure a publishing deal with Virgin Books for her novel, 'Diaries of an Internet Lover', which was a journal of her experiences of meeting people on the Internet. The book was very well received and went on to be published in German, Dutch and Portuguese.

Dawn O'Porter then came to widespread public attention when she attempted to slim down to a size zero by using drastic dieting regimes for the BBC documentary Super Slim Me. The documentary enjoyed critical acclaim. She also presented the product-testing section of How to Look Good Naked on Channel 4

In 2008 Dawn presented a BBC3 series of four documentary films, Dawn…, exploring attitudes to nudity, lesbianism, dating, pregnancy and childbirth. She then presented and produced Seriously Dirty Dancing, a tribute to her favourite film, for Channel Five. That same year she also made a four-part series for Channel 4, which saw her explore various different types of marriages and relationships, episodes featured polygamy, 'free-love', mail-order brides and geishas.

In 2009 Dawn presented a documentary, entitled My Breasts Could Kill Me which explored the experience of breast cancer, for Sky1. In 2011 Dawn sang the Blues for charity, on ITV's Born to Shinewhich raised money for Save the Children. She also acted as Derren Brown's trusty 'straight guy' in his series The Experiments which aired on Channel 4, and won a BAFTA for Best Entertainment Programme.

Dawn recently hosted and co produced a series for Channel 4 called, This Old Thing. The 6 part series was about her love of vintage clothing. Taking vintage skeptics and turning them into vintage lovers. The show was highly acclaimed.

Despite all the above television work, Dawn considers writing her primary career, covering feminism and all aspects of women's lifestyle.. She regularly contributes to various national publications such as The Daily Mail, Cosmopolitan, Company Magazine and the Sunday Times. She then added another string to her bow in 2013 with the release of her first novel for young adults Paper Aeroplanes. The book focuses on the theme of female friendships and has been extremely well received; a fictional tale of an intense female friendship loosely inspired by her own childhood in Guernsey. She then released her second book in 2014 Goose, a follow up to the first novel, which takes the friendship and questions whether it will last.

Clients often ask about purchasing books for giveaways and delegate packs. Below you’ll find a selection of products by Dawn O'Porter. Click the images to view on Amazon's website. For bulk orders, please speak with your Booking Agent.

How to book Dawn O'Porter for your event