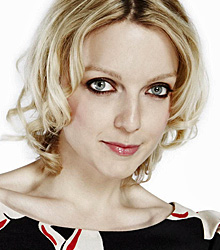 Lauren Laverne began her career in 90's indie band Kenickie while still at school. Following the group's split in 1998 Lauren moved into broadcasting. In radio her highly acclaimed stint as a DJ for leading London radio station XFM was followed by a move to BBC 6Music, where she now hosts a new daily show.

Laverne's first television presenting job was Play UK's series The Alphabet Show, with Chris Addison, made while Kenickie were still together. She has since presented Planet Pop and Loves Like A Dog for Channel 4, Fanorama for E4, Party in the Park with Melanie Brown and Pop for Five and Orange Playlist for ITV, as well as reporting for RI:SE, leading the house band on Johnny Vaughan Tonight and appearing as an expert in a music special of BBC One's Test the Nation.

In recent years she has been seen as one of BBC2's main presenters for their coverage of the Glastonbury Festival and the host of ITV2's coverage of events such as the British Comedy Awards and the BRIT Awards. She also presented a documentary for Sky One on the rise of popularity of the US hit TV Show Buffy the Vampire Slayer, called Buffy: Television With Bite. This was done when the show was returning for its sixth season in 2001, and she subsequently portrayed a vampire dusted by Willow in the final season of the show.

Lauren became as famous for her funny and acerbic interview style as for her music, making her a popular contestant on comedy panel shows such as Never Mind The Buzzcocks and Have I Got News For You.

Lauren Laverne has a weekly Grazia column in Grazia magazine and has recently published her first book: Candy Pop: Candy and the Broken Biscuits. Lauren is also no stranger to the red carpet, having hosted the Scott Pilgrim vs The World premier in Leicester Square.

In 2005, Laverne's passion for her home city resulted in her becoming an ambassador promoting and raising awareness of Sunderland. She received an honorary fellowship from the University of Sunderland in July 2009.

In May 2010, she was a co-host of Channel 4's Alternative Election Night, along with Jimmy Carr, David Mitchell, and Charlie Brooker. In 2011 she re-joined her co-hosts for a new current affairs and satire show 10 O' Clock Live on Channel 4.

Lauren lives in North London with her husband, television producer and DJ Graeme Fisher, and their two children.

How to book Lauren Laverne for your event