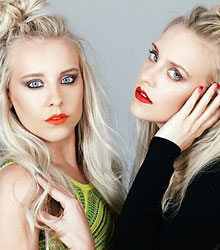 Book The Mac Twins
add to shortlist
About

The Mac Twins’ big break was presenting for Verge Magazine, with whom they covered some of the biggest music events including Wireless Festival and Radio 1′s Big Weekend, they were also flown out to Tennessee with Plan B to record a documentary for Jack Daniels.

They have since been seen and heard on BBC Radio 1xtra (weekly slot), Daybreak, 4od, the Alan Titchmarsh show and BBC free speech, "The Secret Life of Twins" has just been aired on ITV and their documentary "It Takes Guts" has just premiered on CBC in Canada.

The Mac Twins’ unique talent is their ability to connect with any audience – large or small – and keep it real. Identical twins with an opposing taste in music give their DJ sets a unique battle, that are lively and varied.

The combination of Alana’s technical ability and passion for mixing with Lisa’s infectious and energetic performances makes them a double force to be reckoned with. Whether opening festivals or playing intimate launch parties for well known brands the girls never fail to deliver.

We were very happy with the event and everyone raved about the music so we can’t thank The Mac Twins enough. We are hoping to do more parties and conferences this year so whenever we need a DJ we wont be looking anywhere else!

Everyone absolutely loved The Mac Twins, I am so happy we could make something work with them for this event. We will definitely keep the girls in mind for future events and opportunities that could be a good fit. Thanks again!

How to book The Mac Twins for your event

Tags for The Mac Twins