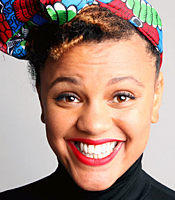 Gemma Cairney was recently part of the presenting line up for BBC's Glastonbury Festival coverage. She hosted the main studio and reported backstage at the festival for BBC Two and BBC Three presenting alongside Lauren Laverne on the Sunday coverage for BBC Two. She made Royal History in July 2014 by hosting a live Google hangout for The Queen's Young Leader project alongside HRH Prince William and HRH Prince Harry from Buckingham Palace.

Gemma is currently the music editor for Company Magazine where she writes a monthly music column and interviews her chosen music phenomena. They have included Haim, Aluna George, Icona Pop, Wild Belle, Rob Da Bank, and Bat For Lashes.

Before joining daytime BBC Radio 1 she previously presented the Weekend Breakfast show and was nominated in the Best Music Radio Personality category at the Sony Awards 2012 when she hosted the afternoon show on BBC Radio 1 Xtra. She is also a regular guest on BBC Radio 4 Women's Hour, Today Programme and BBC Radio 1′s Surgery.

Gemma developed, co-produced and co-hosted The Fox Problem, the first live online entertainment show streamed via a Google Hangout, alongside Georgia L-A and Georgia Okell, which has now been nominated for three Broadcast Digital Awards. The summer saw the girls hit Bestival Festival with Smashbox cosmetics, sharing news and videos and engaging in conversations on Social Media and Series 2 was sponsored by Microsoft HP.

Her radio documentary, Bruising Silence, aired on BBC Radio 1 in August 2012 and won the Gold Award at the Sony Radio Academy Awards for Best Documentary or Feature.

Prior to her own radio show, she presented BBC Radio 1Xtra's Breakfast Show with Trevor Nelson, for which they picked up a Silver Sony award in 2010 for Best National Breakfast Show.

Before hosting the main coverage, she was the official roving reporter at Glastonbury Festival for BBC3 for three consecutive years, presenter for Channel 4's Snowbombing Festival and has presented two series of the T4 Show, Frock Me alongside Alexa Chung and Henry Holland. Gemma supports a range of different charities and enjoys raising money for Oxfam, Leuka, Centrepoint, Trekstock and Women's Aid.

Gemma’s passion and energy was so contagious and it was really interesting to hear about the work she has done in schools.

The party was a great success and as always Gemma was an absolute delight. Totally professional, collaborative and she really made the party the success it was.

Gemma was BRILLIANT last night – she really bought an energy to the awards and she did some great opening remarks – she really got why we were there and what it was all about and she had a fantastic rapport with the judges who came on stage to present their awards.

Gemma did a great job and was lovely throughout.

Clients often ask about purchasing books for giveaways and delegate packs. Below you’ll find a selection of products by Gemma Cairney. Click the images to view on Amazon's website. For bulk orders, please speak with your Booking Agent.

How to book Gemma Cairney for your event