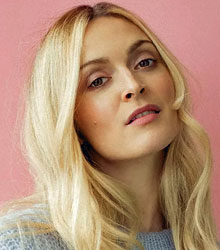 Fearne Cotton is one of the UK's most in demand TV and radio presenters. Her natural charm and warm presenting style has made her a firm favourite with viewers and listeners alike, seeing her crowned Glamour Magazine's "TV Personality Of The Year" in 2007.

Fearne has a great deal of live and pre-recorded presenting experience under her belt having being spotted at the age of 15 by ITV's Disney Club. This opportunity led to a three-year contract as co-presenter for GMTV's live weekend youth series Diggit. Following this Fearne made a strong name for herself as a children's TV presenter hosting Finger Tips, Pet Swap and Mouse for CITV, Granada's youth activity gameshow Pump It Up and Disney's art animation series Draw You Own Toons, which saw her put her art A Level to good use.

She then co-hosted the 30th and final series of Record Breakers and presented the one off special Prom In the Park. She also presented a package of programmes for CBBC including two series of the youth science show Eureka and Call The Shots a show that went behind the scenes at the movies.

Following that Fearne signed an exclusive two year deal with the BBC, becoming the first presenter to host their flagship Saturday morning programme The Saturday Show (BBC1) alongside Sunday morning show Smile (BBC2). In 2003, Fearne took part in Comic Relief Does Fame Academy and in her own words 'murdered' the song Driftwood by Travis.

In 2005 Fearne began hosting Top Of The Pops alongside Top Of The Pops Reloaded on Saturday mornings. Throughout the summer she filmed a show in America with Reggie Yates for CBBC, Only In America which was screened in autumn on the CBBC channel and later on BBC1.

Summer 2005 saw Fearne awarded one of the biggest breaks in her career when she got the chance to co-present the live coverage of the historic concert Live8. This was closely followed in November by Fearne being chosen as one of the presenting team for Children In Need alongside Terry Wogan and Natasha Kaplinski. 2006 witnessed Fearne sign her first radio deal with Radio 1, hosting a Friday morning show with fellow presenter, Reggie Yates. The show was a huge success and quickly both Fearne and Reggie were signed up to host the weekend breakfast show every Saturday and Sunday morning from 7am till 10am. October 2007 saw the duo move their Radio 1 slot to a Saturday afternoon as well as hosting the prestigious UK Top 40 on a Sunday afternoon.

2007 got off to an amazing start with Fearne presenting the backstage coverage for ITV1 at The BRITS , followed by a trip to LA to host The Oscars Red Carpet coverage at the 79th Annual Academy Awards for Sky One. Later in 2007, Fearne was honoured to be asked to carry out the only UK interview with Prince William and Prince Harry in lead up to the Concert For Diana. The concert was a huge success and Fearne co-presented the day for the BBC, which was broadcast across the globe.

In 2008 Fearne caught the eye of US television, flying to LA to host her own one-off prime time special for NBC, Guinness World Records – Live. On the back of this, Fearne was then offered the co-host role on NBC's successful reality show Last Comic Standing, which saw her travel across the US looking for comedy's next big thing.

2009 - 2011 Fearne designs and endorses her own 'Fearne Cotton' fashion range for Very and took the reins from Jo Whiley to present the popular Radio 1 weekday 10am-12.45pm slot.

Clients often ask about purchasing books for giveaways and delegate packs. Below you’ll find a selection of products by Fearne Cotton. Click the images to view on Amazon's website. For bulk orders, please speak with your Booking Agent.

How to book Fearne Cotton for your event