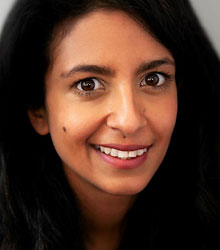 Konnie Huq started her presenting career when she was just 17, fronting a number of children's programmes on The Children's Channel including CBBC Channel's UK Top 40 and GMTV, whilst completing an Economics degree from Cambridge. She also appeared on Newsround as a child, when she interviewed Neil Kinnock before the General Election in 1992.

In 2007, she saw out her tenth and final year in Blue Peter after becoming their 26th presenter on 1 December 1997. Konnie's years on Blue Peter have taken her to the far corners of the world, and among her many Blue Peter highlights are learning to scuba dive; visiting Mozambique to open one of the schools paid for by money raised during the Blue Peter New Future Appeal in 1999; a trip to the village in Bangladesh that her family originate from; and learning how to be a rally driver.

In addition to this she has also interviewed the likes of Tony Blair and Gordon Brown as well as known music and film stars.

Music has been a passion of Konnie's where she has had the opportunity to present such iconic music shows as Top Of The Pops and The Tube broadcast on Channel 4 Radio. Acting has been another of Konnie's passions where she trained at the national youth music theatre along side the likes of Jude Law and Jonny Lee Miller. Cameos have included a servant (called Konnie) on the last episode of the second series of Robin Hood.

Konnie hosted 'London Talking' - a topical debate show transmitting on ITV1 on Thursday evenings - the highlight of the series being Konnie hosting the animated Major debate between Ken Livingstone and Boris Johnson.

Konnie has many feathers to her bow and her versatile presenting style enables her to lend her experience to a wide range of topics, from covering New York and London fashion week for LK today to presenting major sporting and fashion programmes over the summer.

She has been presenting Zoo days for Channel 5, jetting around the world as the presenter for the Red Bull Air Race on Channel 4 as well as presenting for GMTV. She presented the prime time series "Guinness World Record's Smashed" on Sky One and then headed straight to Canada to film Adrenalin Junkie with Jack Osborne for ITV2. She recently presented entertainment show Hannah-Oke on the Disney Channel with Duncan James.

Konnie Huq is an ideal awards host, interviewer and presenter for any live event.

Many thanks for doing such a great job compering for us at our BusinessFutures conference. We have had many positive comments about the event and all the speakers and your role in keeping us to time was fantastic.

How to book Konnie Huq for your event