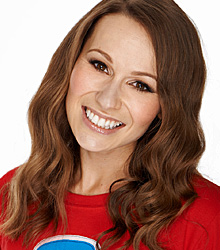 Jen Pringle is an enthusiastic and energetic television presenter who, since 2006, has been one of the main presenters on Channel 5's Milkshake!, the early-morning programming strand for pre-school children.

She is heavily involved in both the script writing and choreography. A passionate and driven individual, Jen puts her considerable talents to good use, most recently in the latest series of Milkshake Bop Box but also in Milkshake's popular magazine series, The Milkshake Show and musical series, Milkshake Music Box.

Jen Pringle was born in York, and grew up in Scunthorpe, attending Salford University where she graduated with a first class honours Media and Performance degree. Jen is also a qualified drama teacher. Leaving university, she was snapped up by 'Milkshake'! and began working as one of their main presenters.

Jen's fun and energetic style made her a popular presenter on 'Milkshake!'. When Channel 5launched their teenstrand 'Shake!' she was introduced as the sole presenter. Jen is also an integral part of the Milkshake Live stage shows and is currently performing in ‘Milkshake Live Party Party'. These all singing, all dancing, high octane live theatre shows star not only the Milkshake presenters but some of Milkshake's most popular characters too and have toured all over the UK. Jen is currently performing in Milkshake ‘Bop in the Park' at Drayton Manor Theme Park!

As well as presenting, Jen is also a talented voice artist; she stars as Teddy Lulu in the hit children's TV show Bananas in Pyjamas, Wendy Witch and Jen Elf in Ben and Holly's Little Kingdom, she narrates Milkshake Monkey and can soon be heard playing the lead character Wanda, in Milkshake's brand new animation, Wanda and the Alien.

She has appeared on ITV's Alan Titchmarsh Show, Channel 5's The Wright Stuff, as a panellist, and most recently in The Great Christmas Toy Giveaway on Channel 5.

Come December each year Jen can be seen appearing in pantomime. She has entertained in various roles up and down the country, starring as Fairy Sparkle in ‘Snow White' at the Kings Theatre in Southsea, the Fairy Godmother in 'Cinderella' at the Grand Opera House in York and Wendy in 'Peter Pan' at the Manchester Opera House. She is looking forward to starring as Snow White this Christmas at the Rhyl Pavilion.

In her spare time she is a keen baker and also likes to keep fit by regularly attending the gym. She is also adept at jet-skiing, waterskiing, ice-skating and rollerblading.

How to book Jen Pringle for your event