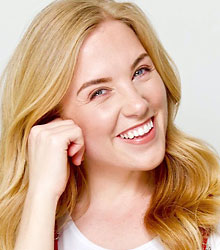 Maddie Moate is a YouTube filmmaker and BAFTA award winning presenter, passionate about curiosity. She has been presenting popular science and tech content online for the past 6 years and has amassed over 18 million views on her YouTube films across multiple channels.

One of the only female “Edu-tubers” in the UK, Maddie makes films which combines the traditional YouTube style with educational content. Her videos aim to inspire a new audience to stay curious, adventurous and encourage science engagement.

Since 2016, Maddie Moate has hosted the hit Cbeebies series Do You Know?, which sees her explore the workings of everyday objects by asking how they are made or work, all made possible with special cameras and animations. In 2017, Maddie triumphed in the presenter category at the BAFTA Children’s Awards and has since starred in the Cbeebies Christmas Show.

Maddie Moate started her career in technology presenting LadyGeek TV, a comedy web series for women about apps and online security. From here she was approached by O2 to host O2 Guru TV and went on to create the online content for Channel 4’s 'Home of the Future'. Maddie now regularly works with various technology giants, including Dixons Carphone, Samsung and Intel.

Her YouTube presence and love of wildlife lead to presenting BBC Earth’s YouTube channel Earth Unplugged. With Earth Unplugged, Maddie investigates the conundrums and quirks of our amazing planet and in doing so has hatched alligators, been covered in leeches and even swam with prehistoric fish!

Maddie has fronted the channel since it started in 2012. It has over 600,000 subscribers and won a Panda award from Wildscreen in 2014 for Best New Media. These successes grabbed the attention of BBC America, who turned some of her best bits into a one off special television programme “It’s a Mad Mad Maddie World”.

Aside from digital content and television, Maddie also brings science to the stage, writing, producing and hosting shows for her audience.

Maddie Moate is a patron of the Youth STEM Awards (YSA) scheme and an ambassador for Eureka: The National Children’s Museum.

Whether hosting events for technology clients, delivering talks to young women in science or leading Facebook Lives for the World Premiere of Blue Planet 2, Maddie is comfortable with an array of audiences and environments.

Maddie Moate’s Fantastic Factory Tour. 30-40 mins (perfect for festivals)
Welcome one and all, Maddie Moate is opening the doors to her fantastic factory for the very first time! Maddie is always busy exploring factories on telly and YouTube but now she’s inviting you all to join her own tour and marvel at the machines inside! Come along and find out how some of her favourite things are made live on stage, with a little help from her special cameras.

Maddie's Mission to Mars is a 45-minute show ideal for early learners and family audiences and can be adapted to suit a wide variety of performance spaces. In the show she is looking for new recruits to join her Astronaut Academy for a one of a kind Mission to Mars! Have you ever wondered how rockets work? How space suits are made or what space smells like?! Find out with Maddie as she takes you on a journey through the solar system, equipped with special cameras and science demos!

Busy Bees is a 40 minute show ideal for schools and family festivals, best suited to classroom size audiences or small, intimate stages so that everyone has a chance to get hands on! Maddie takes her audience on a journey through food and science as they learn about foraging, honey production and the importance of bees as pollinators.

Ideal for early learners and Key Stage 1, this show will inspire children to think about the natural world whilst involving them in plenty of interactive elements. Expect honey taste tests, fancy dress, silly games and an epic waggle dance finale!

How to book Maddie Moate for your event