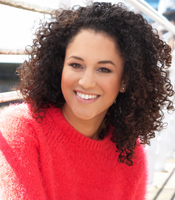 In June 2012 Cat Sandion joined Cbeebies to co-present BBC Worldwide's ‘Cbeebies South Africa' which is exclusively available to DStv. After 6 months of presenting for BBC Worldwide, Cat was then asked to join the UK's favourite and BAFTA Award winning Preschool Channel Cbeebies as a core presenter.

During her time on the channel Cat has voiced and promoted the ‘Cbeebies app' which received over 2million downloads in less than 6 months, she has also voiced 2 series of ‘Lets Move' for BBC Learning. Keen to do live work and to interact with the audience, she hosted and presented at ‘Mr Bloom and Friends Tour' which was a huge success. Also, as a very enthusiastic and eager traveller Cat was asked to present links in Lapland for Christmas content, which in minus 30 degrees temperatures was an exciting and rewarding challenge.

Cat was in her element on stage as the narrator in 'A Cbeebies Christmas Carol' which was a huge hit when it aired on BBC1 on Christmas Eve. As well as studio presentation, Cat is very experienced at presenting on location and thrives on the uncertainties of working outdoors, with animals and also with the general public. Her professionalism and ability to adapt to different environments and situations make her a pleasure to work with.

Cat Sandion's presenting career began in her graduation year 2008 where she became one of five presenters on preschool show ‘Hi5' (Cartoonito/Citv) which aired daily until 2010. Highlights over this period include performing at Cannes TV festival Mipcom, rehearsing alongside the Australian Hi5 cast in Sydney, a successful UK and Ireland tour of ‘Hi5 Surprise' which was also at the HMV Apollo Hammersmith, performing for royalty in Abu Dhabi and guest presenting on Ireland's top Children's channel RTE Den Tots.

Cat then returned to the stage performing as a drummer/dancer in UK Number 1 Theatre Tour of musical extravaganza ‘DrumChasers' which travelled the country as well as many European Theatres. In 2012 Cat presented a Phonics series for Espresso Education which was produced to introduce and reinforce phonics teaching in the classroom and is used in schools throughout the UK.

Cat Sandion was born and raised in South East London to Mauritian parents and started her many years of dance and performance training at the tender age of 5. Her passion to perform turned into a career aim when she secured a place at the prestigious BRIT School in Croydon, she thrived on the challenges and performance opportunities during her 3 years there including dancing at the BRIT Awards for boy band Blue and legend Tom Jones and also at BBC Bands Unsigned. Cat then went on to win a full scholarship at Bird College, where she gained a BA (Hons) Degree in Dance and Theatre Performance, completing her training as a professional dancer, singer and actress.

Cat Sandion is a kind-hearted and generous character who has the ability to inspire and encourage others with her passion for the arts, travel and maintaining inner and outer health. Outside her TV and VoiceOver work Cat is a music enthusiast, music has always been a big part of her life, she has an extensive range to her musical taste which was influenced by her dancing background and Mauritian heritage. Cat has a huge passion for world travel and is extremely interested in history and world culture.

How to book Cat Sandion for your event