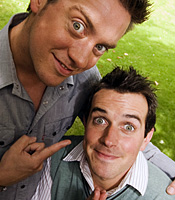 When they were still known as Richard and Dominic they met at children's BBC as teenagers, doing TV links between programmes. They soon became firm friends and lived together for four years.

Dick has been involved in many pantomimes, including Aladdin, Cinderella and Dick Whittington, while Dom, also a magician, has co-presented Sky One's Brainiac's Test Tube Baby as well as BBC Three coverage of Comic Relief does Fame Academy.

They found fame on children's Saturday morning television programme Dick and Dom In Da Bungalow which saw celebrities and contestants playing various oddly-named and weirdly themed games to win prizes. Able to show off their spontaneity and liveliness, Dick and Dom in da Bungalow was live, unrehearsed and unscripted, allowing the freedom for the presenters to be themselves.

Other programming credits include The Sunday Morning Show (BBC Radio 1), Are You Smarter than a 10 Year Old (Sky 1).

As well as TV, they star on stage and the big screen. In 2011 they received critical acclaim for their roles in feature film Horrid Henry: The Movie. They have headlined Butlins with an 80 date sell out tour and in 2013 they trod the boards to rave reviews in the West End starring as King Arthur and Patsy in Monty Python’s Spamalot.

In the world of voice-over they play B1 and B2 in the animated classic Bananas in Pyjamas.

Clients often ask about purchasing books for giveaways and delegate packs. Below you’ll find a selection of products by Dick & Dom. Click the images to view on Amazon's website. For bulk orders, please speak with your Booking Agent.

How to book Dick & Dom for your event