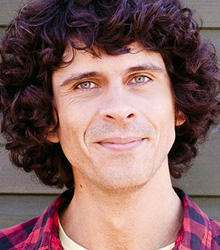 These shows have all been a massive hit with children and parents alike. He also fronted Andy's Secret Hideout, Andy's Baby Animals and starred in CBeebies' enchanting production of A Midsummer Night's Dream as Peter Quince, and is well known for his work on Get Set Go and Big Fun Time with co-presenter Sidney Sloane.

A keen performer, Andy Day studied ‘A’ level performing arts at college and got his first job at London’s Millennium Dome as a character host and street performer, he then went to Italy and worked with children at the Italian schools taking workshops and performing plays for 3 months.

After that, Andy went travelling for a year and every year from then he has tried to get away to visit and explore different countries. He loves a good adventure and a bit of a challenge, he has run the London marathon, climbed the three peaks in 24 hours, sky dived, paraglided and likes to surf (although not very well).

Andy started his TV career hosting Cash House a TV quiz show which ran for a year, but his passion was always in Children’s TV. Then the audition for a Cbeebies presenter came up and the rest, as they say, is history.

Andy especially enjoys the Christmas period as it means pantomime time! He has appeared for many years in CBeebies' annual televised pantomime, playing such colourful roles as Ebeneezer Scrooge in 2013's A Christmas Carol, Captain Hook in 2014's Peter Pan, the Mad Hatter in Alice In Wonderland and also starred in the 2016 version of The Nutcracker.

Outside of CBeebies, he has played The Genie in Aladdin at the Kenneth Moor Theatre, an ugly sister in Cinderella at The Octagon in Yeovil and Bedworth, Dandini in Cinderella at The Alban Arena and Captain Crabstick in Dick Whittingon at the Sheffield Lyceum. In 2015 he lit up the stage at the Bristol Hippodrome as Muddles in Snow White and the Seven Dwarfs, followed by playing Billy Goose in Mother Goose in Sheffield in 2017 and Buttons in Sleeping Beauty in St Albans in 2019.

When not presenting for CBeebies, Andy also stars in his own fantastic family show, Andy's Dino Raps, which is full of interactive fun and catchy raps about everyone's favourite dinosaurs. He also fronts his own live band, ‘Andy And The Odd Socks’, which was recently described as “the best children's band in the world” by Sam and Mark — you can see the band’s profile separately on this website.

In addition to making personal appearances and hosting awards events, Andy Day is a very popular media personality at corporate fun and family days where he hosts games and events, acts as presenter / MC introducing the other acts and of course undertakes meet & greet duties where he can mingle and chat with the guests.

Andy’s Dino Raps
Andy Day brings his love of dinosaurs and music to the stage, in an energetic, interactive, 30 minute live show. Dance, sing along and join in pure energetic music and madness with Andy's Dino Raps.

Get ready to swish your wooly mammoth trunks from side to side and roar like never before, in a 30 minute music festival extravaganza! You'll have so much fun stomping and singing that even your mums and dads will want to travel back in time and see it all over again! Featuring two back up dancers too!

Clients often ask about purchasing books for giveaways and delegate packs. Below you’ll find a selection of products by Andy Day. Click the images to view on Amazon's website. For bulk orders, please speak with your Booking Agent.

How to book Andy Day for your event