Book Andy and The Odd Socks add to shortlist 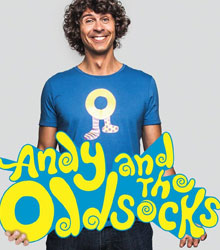 Book Andy and The Odd Socks
add to shortlist
About

Much loved children’s BBC TV presenter Andy Day’s brilliant band ‘Andy and the Odd Socks’ started out playing gigs, releasing music and championing the hugely successful and far reaching ‘Odd Socks Day’ for Anti-Bullying Week. The children’s band were so popular that they were snapped up for a brand new TV show for CBBC called ‘Andy and the Band’.

Andy truly rocks out as the Odd Sock’s front man with Rio from Planet Rock on guitar, the mega Moxy on drums, cool Blu on bass and crazy Cousin Mac on the keys (and hoover, don’t ask!)

Their first album, ‘Who Invited This Lot’, was released by Universal Music in November 2017. Quickly dubbed ‘the saviour of the school run’, the band fast established a cult following for their quirky, funny and incredibly catchy songs. Reinforced with a message that its OK to be different, and its OK to be you… children and parents alike have really latched on what it means to be an Odd Sock.

Andy and the Odd Socks have played shows up and down the country, including countless festivals, Glastonbury, Camp Bestival, Gloworm, Big Feastival, Shambala, Larmer Tree Port Eliot, Standon Calling and many more. The band also opened the BBC’s very first children’s festival, CBBC Summer Social in Liverpool in 2018 playing all 3 days on the main stage to an amazing reaction.

With their own shows taking them round the country, Andy and the Odd Socks are introducing kids to live music for the first time… and that’s why the kids (and mum and dad too) love them!

Performed by Andy Day and his band, ‘Andy & The Odd Socks’, the tracks are fantastically creative. The songs play out through a broad range of musical styles - rock, pop, rap and folk... all finished off with a large dollop of tongue in cheek!

The band’s music has been created for children between 3 and 8 years old, however, older children and parents seem to have their favourite songs too!

I love him… it was absolutely raucous, it was crazy

How to book Andy and The Odd Socks for your event

Tags for Andy and The Odd Socks