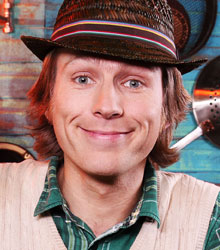 Brought to life by Ben Faulks, Mr Bloom is one of CBeebies best loved characters and has steadily been building a fan base with pre-schoolers and their grown-ups since 2011. The BAFTA-nominated and RTS award-winning BBC show has spawned numerous spin-off series with Mr Bloom appearing on a variety of CBeebies shows.

An educational children's television program, the core theme of the show is nurture, in both gardening and child development; Mr Bloom's Nursery features gardener Mr Bloom, who helps children to get involved and inspired by nature. In each episode, Mr Bloom and his Veggies are visited by a group of children — known as “tiddlers” — who help out around his allotment, feeding his "Compostarium" compost bin and interacting with puppet vegetables.

Ben developed the characters and concept for Mr Bloom's Nursery from an interactive street theatre piece he created called The Vegetable Nannies, which he’d toured around the UK and Europe for a number of years. Approaching the BBC with his ideas in 2009, the show was commissioned and developed into its current format, going into production during 2010. Ben was nominated for a BAFTA award for best Children's Television Presenter in 2011, when the first series transmitted, and the show won an RTS North And West award for best children's programme the same year. It was then nominated again in 2012.

Subsequent re-commissions went on to provide over one hundred episodes with a variety of Mr Bloom appearances in other CBeebies & CBBC shows.

In addition to his on-screen presence, Mr Bloom can be found performing live in a number of contexts either with his one-man stage show or with his four piece band of musical gardeners.

Mr Bloom appears at a variety of festivals, Christmas light switch-ons, parades, shopping centres and plenty more. So, if you have an event in mind, get in touch and let’s discuss.

Mr Bloom Solo Stage Show
Why not, pop along and say ‘Ello!’ with Mr Bloom. There’ll be a bundle of veggie stories, gardening games, and catchy nursery songs for tiddlers and parents alike.

To sum it up in the words of a famous aubergine: ‘Let’s sing and dance and have some fun!’

This one-man stage show encompasses all the familiar songs, stories, games from the TV show and is effortlessly engaging, entertaining and educational. A perfect family act for any live event. 30 mins.

Mr Bloom & His Band
At the end of a long day’s gardening and once the veggies are asleep, there's nothing Mr Bloom likes to do more than get together with his friends on the allotment and play some songs. In fact, it's so much fun they’ve formed a band and gone out on tour. There’s Dibber on bass, Uncle Mickey on keys, Rodney White-fingers on drums and every body’s horticultural hero, Mr Bloom on Ukulele.

Mr Bloom and His Band are guaranteed to get families dancing and singing. The show features all the musical hits from the TV shows as well as numerous cheeky covers including Queen, Guns n Roses and Vanilla Ice.

There’s plenty of audience participation led by Mr Bloom’s trademark humour, along with a special guest appearance from ‘Peggy the Dancing Bean’ (cue the ABBA cover).

They can be unplugged or plugged to suit the occasion at hand. Duration tailored to suit your requirements but typically 60 minutes.

Mr Bloom was great thank you. All parents, teachers, Governors and especially children, thought that he was amazing. It was a lovely low key event and a great success, so thank you for your help with the booking.

Ben Faulks (Mr Bloom) was lovely to work with, the kids loved him and so did the parents. His stage show is perfect for a family event as it is lively and also engages children with gardening and healthy eating!

We were all very excited to welcome Mr Bloom – he's a firm favourite with all the family and educated youngsters of the healthy benefits of growing fruit and vegetables at home.

I'm just back in the office today after the Christmas Lights Switch On. Ben Faulks aka Mr Bloom did an excellent show... There were over 10,000 people at the switch-on... Please pass on our sincere thanks to Ben as he was a key highlight for the show and it woudn't have been nearly so well received without him.

Clients often ask about purchasing books for giveaways and delegate packs. Below you’ll find a selection of products by Ben Faulks as Mr Bloom. Click the images to view on Amazon's website. For bulk orders, please speak with your Booking Agent.