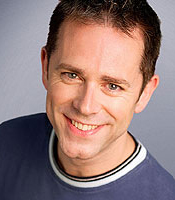 Chris Jarvis is one of CBeebies most experienced and versatile television presenters. A naturally charismatic, lively and engaging performer, he is highly sought-after for personal appearances, ribbon-cutting events and hosting corporate family fun days in addition to presenting corporate videos.

Chris Jarvis started his career in the entertainment business, like so many others, as a Butlin's Redcoat. He was involved in amateur dramatics and pantomime from an early age but his greatest influence and inspiration was his grandmother who danced in some of the great London Palladium pantomimes. Chris writes, directs and performs every year in panto, and in 2012 he wrote and starred in the CBeebies Christmas Panto featuring all of his colleagues from the BBC channel.

Chris came to public prominence during the early 1990s on Children's BBC, presenting in The Broom Cupboard alongside Zoë Ball and Josie D'Arby, as well as hosting his own shows like Look Sharp. Chris wrote much of his own material for Children's BBC, including the mini soap opera Wood Lane TV. In 1997, Chris was part of The Friday Zone with Debra Stephenson, Peter Simon, Dominic Wood, Steve Rock and Emma Lee. They released a single called "Glasses" as a spin-off from the programme, to raise money for Comic Relief. He then hosted Fully Booked with Tim Vincent and Gail Porter for a few years. He has appeared on many other TV shows including 'Short Change', 'Exclusive', 'Playdays' and 'Soap Fever'.

When CBeebies was created by the BBC in 2002 to cater exclusively for their pre-school audience, Chris Jarvis was one of the original line-up of presenters, starring alongside Pui Fan Lee everyday from 9am - 3pm in 'Discover and Do' then in the 'Bedtime Hour' from 6pm, until leaving to write and co-star in Show Me Show Me.

As main presenters of CBeebies, Chris and Pui formed an inimitable double act, loved by children, their parents and carers alike. After seven years fronting Discover And Do and The Bedtime Hour, the duo put their heads together to start developing a new show and, under the creative direction of Something Special producer Allan Johnston, Show Me Show Me was born in 2009.

In 2012, Chris Jarvis was a guest on the CBeebies show 'Justin's House' starring Justin Fletcher (AKA Mr Tumble). Since 2010, Chris and Pui have also toured UK theatres with their live show 'The Chris and Pui Roadshow'. As an actor, Chris has appeared in The Demon Headmaster and ChuckleVision, and played Mr Mopple in early CBeebies story-telling programme Step Inside. He also provided the voice for Mr Tall in the 2010 Mr Men Movie.

CBeebies remains the most watched television channel for the under sixes. With almost half of the target audience tuning in each week (parents and carers with children aged 0-3 and 4-6 year olds in digital homes) it reaches in excess of double (almost three times) the audience of its pre-school competitors. And the CBeebies website regularly reaches over a million weekly users.

How to book Chris Jarvis for your event