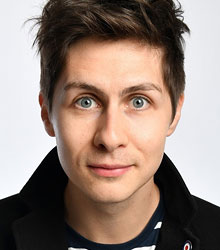 Ben Hanlin is the star of his hit ITV2 show ‘Tricked’, tricking unsuspecting members of the public and shocking celebrities with his own special brand of cheeky magic close-up conjuring and mind games Candid Camera-style.
Tricked drew in over 1.7m viewers per show and won Best Entertainment Programme at the Broadcast Digital Awards 2014.

Ben hails from Birmingham and for over fifteen years Ben has been performing his sleight of hand magic and stage magic at events all over the UK. The fusion of magic and comedy is what makes Ben so different and successful. He’s able to produce astounding large-scale illusions or highly detailed close-up magic, all with his unique sense of humour.

In September 2010 Ben Hanlin launched his online show, Magic Boy finds... He believes he can find any celebrity in the World within 48 hours and perform a magic trick to them, with the help of his friends on Social Media sites such as Facebook, Twitter etc. His adventures have seen him perform his fresh style of magic to celebrities such as; David Hasselhoff, Fearne Cotton, Michael McIntyre, Frank Skinner, John Bishop and many more, and he has over 900,000 views on YouTube!

Apart from appearing in three series of his own TV Show, Ben has TV appearances including Celebrity Juice, Live at the Palladium, BBC Breakfast, This Morning, Good Morning Britain, Soccer AM. In 2020, he starred in ITV’s Dancing on Ice where he finished fourth place.

From a big conference to a small reception, Ben can turn any event into a unique occasion

Ben Hanlin has performed at all manner of corporate and private functions for audiences from 2 – 2000; from close up intimate shows to large-scale staged illusions. His warm, fun and cheeky personality, coupled with devilishly quick sleight-of-hand makes Ben an instant hit wherever he performs.

Close-up Magic Performances
For close up Ben loves mingling around any event, amazing guests with his magic, which will often involve a deck of cards, mobile phones and other everyday objects. When asked about his most memorable close-up performances, he commented that being flown out to a private yacht in the south of France to perform for Kim Kardashian, was pretty ‘rock and roll’!

Stage Magic Shows
Fresh from appearing in the West end show The Illusionists, Ben Hanlin is in his element when performing on stage. His cheeky personality and modern contemporary style of magic help him to win over audiences all over the world. Whether he’s attempting to read someone’s mind or magically change the contents inside a sealed Coke can, all of Ben’s tricks involve audience participation and some level, which means crowds feel they are very much part of the show and not just passively observing.

Ben’s stage magic show is jaw-dropping playful, fresh and laugh- out-loud funny. Usually ranging between 25-30 minutes, there are lots of moments of audience interaction and Ben’s friendly manner makes a show where you needn’t be anxious about putting your hand up and taking part.

Ben has hosted our finals a number of times. With over one thousand people in attendance, his great energy and incredible magic make him a hit every year!

Ben delivered a fantastic show at the Inchcape Leaders event in Brussels, he kept a room that included 62 Nationalities, transfixed through out, he had wonderful natural engagement with the audience who were bamboozled by his illusions, most impressively the show was tailored around key company members and brought the house down

We hired Ben and received some of the best feedback ever (and I mean, ever!). His ability to work with the audience was totally brilliant. I still cannot get my head around how he turned 250 people, into magicians! He is very special and so easy to work with.

That was some of the best magic I’ve ever seen!

Ben was the headline act at our annual conference. He delivered a very unique and special show which incorporated everything he does best, humour and magic. The audience of over 500 guests absolutely loved him!

Just a quick note to ask you to pass on my warmest thanks to Ben Hanlin for an outstanding performance last week at the CIBSE West Midlands Dinner. The performance was fantastically well received, making the evening our most successful event to date by far. Aside from his amazingly engaging performance Ben went beyond the call of duty and we appreciate the time he took to speak and have photographs with our guests after his stage show. Professional, courteous and friendly throughout, the content of his performance was enjoyed immensely by everyone in the audience. I wish Ben all the very best for the future.

How to book Ben Hanlin for your event