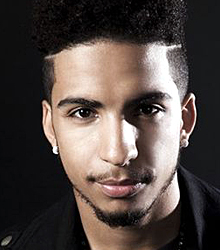 Book Troy
add to shortlist
About

South London magician Troy is set to become a household name; brilliantly blending hidden camera technique with close-up and situational illusions, he presents a new take on classic magic with a unique performance style that is spontaneous and unforced.

Troy Von Scheibner has has captivated a new generation with his TV show that has been sold to over 120 different territories worldwide. Showing his amazing ability as a magician and breaking the barriers and stereotypes that come with being one.

With a Jamaican mother and German father, multiple tattoos and eclectic sense of fashion, the Lewisham resident who favours 70s gold watches and vintage clothing doesn't look like your average magician. Troy inherited his adventurous streak from his father who, at the age of six, took him to see local magician The Great Kovari, where Troy fell in love with magic.

His passion for magic was re-ignited in the late 90's whilst watching new-age street magician David Blaine. Troy studied his programmes intently, figuring out how to recreate the magic. It was then that Troy joined The Young Magicians Club at the age of 13, the youth section of the Magic Circle.

Troy went on to win The Magic Circle’s “Young Close Up Magician of the Year”. Balancing magic gigs around London Troy also gained a university degree in Creative Advertising Studies, followed by a job in retail. In 2013 Troy quit his job on London’s Carnaby Street and began working as a full time professional magician.

2014 Saw the beginning of Troy’s exciting television career as he was signed for an innovative new style of magic show, with a six-part series named after the magician, which launched on Channel 4. Series 2 was broadcast in 2015 followed in December the same year with a one-off special titled “Troy: Cyber Hijack” which featured Troy performing tricks and pranks involving technology.

Troy’s style — similar to his television shows — is to present mix-and-mingle close-up magic, moving between the groups of guests that have gathered around him.

Unlike ‘conventional’ close-up magicians, to obtain the best performance that suits Troy’s style of magic, he will not perform at the tables whilst guests are seated for dinner. Book him to perform during your drinks reception as guests arrive, or to mingle after the meal.

Troy typically presents 60-90 minutes of close-up magic during his performance. His act is best received when presented at events where there are fewer guests, an ideal audience being somewhere between 100-250 guests.

Just to say that we had a fab evening with Troy! He went down tremendously well and actually, although I think the majority of our delegates missed a trick (hah, see what I did there?) - It was really nice to have an intimate audience with him. Many thanks for a brilliant booking!

How to book Troy for your event