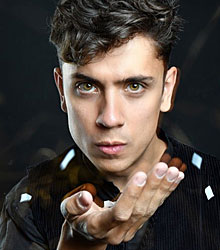 Ben Hart is a critically acclaimed magician and magic designer, who's performances have won him numerous awards, including The Magic Circle's “Young Magician of the Year” in 2007 and their highest award attainable as a “Member of the Inner Magic Circle with Gold Star”.

Ben has become renowned for his unusual performance style that mixes original and unique magic with storytelling and theatricality; his performance style having once been described as a cross between Hannibal Lecter and Tim Burton.

He possesses a natural charm, hypnotic demeanour and quiet confidence that is refreshingly understated in a time when the trend is for big, brash and flash.

Ben’s performances are original, daring and always startling. His magic has taken him to some of the world's top night spots, theatres and private parties, from Monaco to Las Vegas, where he breathes life into inanimate objects, makes them shrink or defy gravity, bends the laws of physics and turns the invisible visible.

As a theatrical magic consultant, Ben approaches problems from the view of both a performer and also as an inventor. Like a modern-day Jonathan Creek, he invents magic tricks, special effects and impossible illusions for the world of theatre, film and television.

Ben Hart is well-respected as a highly original magic creator and the go-to guy if you need to decapitate, vanish, levitate, transform, etc - no task is too unusual or impossible. As a teacher of magic, he has mentored all kinds of people, from aspiring and experienced magicians and business executives to Sir Ian McKellen (Ben literally taught Gandalf magic!...).

In May 2019, Ben Hart took part in series 13 of Britain’s Got Talent, in what was to become a record-breaking year for magicians entering the competition. Ben transformed a single piece of confetti into an egg by bouncing it on a hand fan, before cracking it into a glass, right in front of the audience’s eyes.

The trick gained him a standing ovation from the theatre audience mid way through his set, which also included the teleportation of a random audience member from one side of the stage to the other. Simon Cowell was left dumbfounded, commenting simply: "That was unbelievable”.

Ben stormed it through to the live finals, wowing the celebrity judges, audience and viewers at home, every step of the way. He finished the competition in 3rd place ahead of some stiff competition.

Equally comfortable performing small 'close-up' miracles or large-scale stage illusions, Ben's captivating magic combines great skill at sleight of hand and a knowledge of illusion to create performances that are slick, baffling and timeless. He has also delivered a lecture on the creative process of magic at Oxford University

Ben Hart is the guaranteed solution to amaze your guests at any event — large or small, corporate or private — making it memorable and leaving them talking about your event for days, months and years to come.

He can be found performing his astonishing close-up magic at private parties across the world and has performed for celebrities, billionaires, royalty and heads of state at just about every kind of event imaginable.

Close-Up Magic
Magic is a perfect icebreaker at any kind of event and is perfect if you have guests who do not know each other. It's a universal language that can help build connections in the room.

Ben's aim is to help your guests integrate and leave them with amazing memories of your corporate event, party, wedding or special day. Ben Hart will mingle with your guests at a drinks reception performing impossible miracles or at tables during a dinner event.

Cabaret and Stage
If a larger show is what you're looking for, then Ben Hart offers a number of different stage show packages, from his full show, to a 12-15 minute spot after dinner.

Ben will always amaze as he creates impossible stories and mysteries that will amaze and move your guests. His material is highly original and he is a sought-after cabaret performer, working at some of the world's most prestigious venues and night clubs.

Ben Hart has that certain kind of star quality one sees only once in a generation – one is not looking at trickery, but pure magic!

To watch Hart's spidery fingers at work is a show in itself… his sleight of hand is extraordinary!

Magic tricks and special effects that should have Derren Brown reaching for his notebook.

Just a note to say thank you for suggesting Ben, he was a great act – amazing talent. Everyone enjoyed the night and appreciate you accommodating the last minute change, it worked really well.

Your performance was absolutely first class and most of my guests are still standing there with their mouth’s open. It is the first time that I have seen them stunned into silence.

How to book Ben Hart for your event