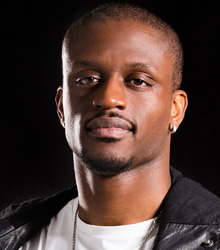 Considered to be one of the most exciting talents to have emerged from the magic industry, Richard Essien also known as Magical Bones, has been entertaining audiences across the globe for over 10 years.

Starting out his career as a professional hip-hop dancer, he was given the nickname ‘Bones’ because of his hard-hitting dance style.
An exceptionally skilled break-dancer and a gifted showman, Bones has gone on to establish himself as one of the most respected and prominent figures within the UK hip-hop scene.

He has also worked with some of the biggest names in the music industry including Madonna, Alicia Keys and Plan B, and is the featured dancer in the music video of Mint Royals’ No. 1 smash hit single, ‘Singing In the Rain’.
Now focusing primarily as a magician, Bones was one of the featured magicians that launched the sold-out West-end Magic show ‘Impossible’, where he stunned an audience of over 10,000 people with his signature back-flip card trick. He is also the star of the worlds first ever 4K ultra high definition TV magic series, ‘Around The World in 80 Tricks’, which is being shown to over 60 million homes globally.

In 2019 his Black Magic show enjoyed a sold-out run at the Edinburgh Festival Fringe, which was followed by his debut solo UK tour the following year.

How to book Magical Bones for your event