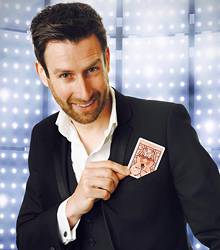 A magician and mind reader with a genuine magic touch, Jamie Raven was runner up in series nine of ITV’s prime time show Britain's Got Talent in 2015, and the first ever close-up magician to reach the grand final.

Unanimously voted into the world-famous Magic Circle on his first attempt, Jamie’s theatrical flair and astounding trickery have flabbergasted the great and the good all over the world. His style of modern and contemporary deception combines classic, traditional expertise with a cheeky and infectious sense of humour.

Expect the impossible and suspend your disbelief; the emphasis is never on trying to fool or embarrass anyone, but rather bringing them along for a brief tour of the exciting world in which Jamie operates. Where £5 notes changing into £50, full bottles of wine pushed through tables, borrowed items vanish and reappear at will and demonstrations of why you should NEVER play cards with a stranger are every day occurrences.

Jamie Raven is one of very few magicians in the world specialising in this area of conjuring who can also offer you more psychological based illusion or “Mind Reading” at the same time. Using a variety of techniques to predict, suggest and control behaviour in order to achieve the apparently impossible. Recreating a drawing that somebody has made without seeing it, telling somebody their banking PIN Number, their Mothers maiden name, or guessing correctly the outcomes of decisions that are yet to be made amongst other effects.

Jamie Raven is the magician of choice for numerous high-profile companies including Apple, Virgin, Samsung, HSBC, Mercedes and GlaxoSmithKline, he was also invited to Buckingham Palace to perform for Queen Elizabeth II's 80th Birthday Celebrations.

Whether up close and personal, or on a grand stage in front of hundreds, the emphasis is always on entertaining, and Jamie Raven never fails to leave every single person in the room laughing as hard as they are mystified.

Jamie Raven was truly excellent. Everyone thoroughly enjoyed Jamie’s tricks and they were just incredible.

Thank you for attending and entertaining this afternoon. I could hear from the roars of laughter that everybody thoroughly enjoyed your performance.

That is outstandingly brilliant, I love the stuff you do.

You have made me believe in Magic!!!

How to book Jamie Raven for your event