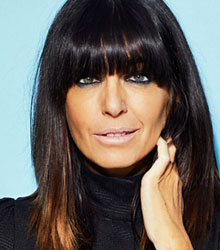 Claudia Winkleman is one of the most sought after television presenters working today.

She has previously teamed up with Graham Norton to present Eurovision Dance Contest and fronted Eurovision-Your Decision, for BBC1 with the great late Sir Terry Wogan. Back in August 2008. she hosted London 2012 Party live from the Mall – celebrating the Olympic hand-over.

She has presented Central Weekend Live, a live topical studio discussion show for Carlton Television and BBC 1's Holiday programme where her charm and acerbic tongue earned her her own spin off programme - an hour long prime time special which took her around the world in 34 days reporting from Japan, India, Costa Rica and Dubai.

Claudia Winkleman loves to write, she has a weekly column in the Independent. She is a regularly contributor to the Sunday Times, Glamour and Cosmopolitan. She graduated from Cambridge University with an MA Hons in History of Art.

Claudia is a popular choice of presenter for corporate award ceremonies.

I just wanted to send you a personal email to let you know how great Claudia was! She was the most down to earth, laid back nicest person to work with! All the girls on my team loved working with her. The feedback we have had on her hosting the show has been great and she presented the awards perfectly with a speedy, cheeky great personality! I hope she enjoyed the evening as much as we did. We would love to work with her again in the future...

Thanks so much... Claudia was really great, she really did pull it off brilliantly! She had them eating out of the palm of her hand from the very start. I thanked her on the night, but please convey our most sincere thanks to her again.

Claudia did very well. She had them eating out of her hands, she was very respectful of the industry and created a great atmosphere. Please thank her from all of us; we would love to work with her again.

Clients often ask about purchasing books for giveaways and delegate packs. Below you’ll find a selection of products by Claudia Winkleman. Click the images to view on Amazon's website. For bulk orders, please speak with your Booking Agent.

How to book Claudia Winkleman for your event