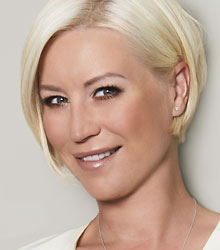 A charismatic, sassy and energetic presenter, Denise Van Outen has become a household name in Britain, thanks to roles on show such as The Big Breakfast and more recently BBC's Any Dream Will Do. Denise has since gone on to show exceptional talent on the stage, appearing in several productions in the West End and on Broadway.

Denise joined The Big Breakfast on Channel 4 as a weather and travel reporter in 1996, and landed the main co-presenting role in 1997. It proved to be her big breakthrough, with her cheeky 'Essex Girl' personality and sexy clothing playing off well against the quick wit of Johnny Vaughan, and together they recovered audience figures to record levels.

Stage success soon followed for Denise, first playing Roxie Hart on the stage in the hit musical Chicago at the Adelphi Theatre in the West End of London in 2001.

In 2003, she returned to the London stage at the Gielgud Theatre in Andrew Lloyd Webber's one-woman show Tell Me On A Sunday, which he reworked for her. She was a huge success and the show ran for nearly a year before embarking on a 10-month UK tour. She then joined the cast of the established ITV sentimental drama Where the Heart Is as one of the lead characters, but stayed for only one series. Recently, Denise headed over to the US, where she proved a hit, fronting NBC's Grease: You're the One that I Want!, and has been steadily developing her US profile ever since.

In spring 2007, she joined the panel for BBC One's Any Dream Will Do! which was casting Joseph in Joseph and the Amazing Technicolor Dreamcoat. 2007 also saw Denise starring in the musical Rent in the role of Maureen and in 2008 she was reunited with her old pal Johnny Vaughan for 6 months to co-host the Capital Radio Breakfast Show.

Clients often ask about purchasing books for giveaways and delegate packs. Below you’ll find a selection of products by Denise Van Outen. Click the images to view on Amazon's website. For bulk orders, please speak with your Booking Agent.

How to book Denise Van Outen for your event